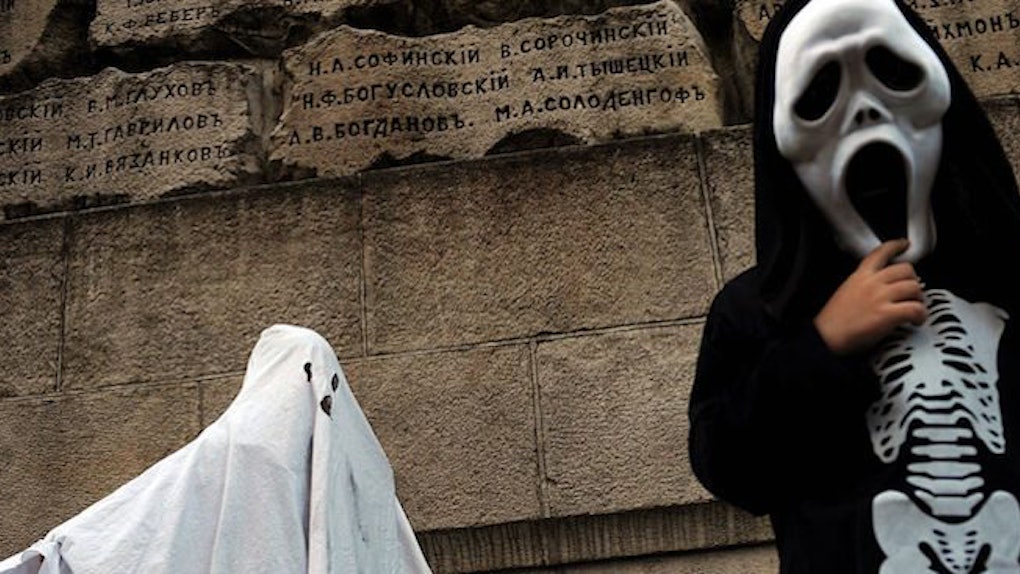 In case you missed it, there was a creepy AF Twitter thread happening in early August with tweets about "Dear David." Sounds innocent enough, right? Yeah, if David weren't the ghost of a little boy who, according to the tweets, specializes in making really weird things happen to Adam Ellis, a writer and artist for BuzzFeed. Ellis took to Twitter to fill everyone in (and provide ample nightmare-inducing material).

The first round of tweets is enough to send you rummaging for your old nightlight: It all began in a dream where Ellis experienced sleep paralysis as David (who, according to Ellis, has a huge misshapen head) rocked in a chair at the end of his bed and then started "shambling" toward Ellis. After Ellis finally woke up, David made his his way into Ellis' waking hours and totally messed with him by doing eerie ghost business in the hallway, which Ellis' cats would regularly inspect around midnight.

Oh, did I mention this is all made way more disturbing by the fact that a little girl came to Ellis in a dream explaining who David is and telling him he can ask David questions, but only two of them? If he asks three, David will kill him. Well, David was in Ellis' dream again, and Ellis got a little too curious and made it to three. After that, Ellis moved to the apartment above him (thinking that David would lose track of him), but nope, David got the memo and moved on up with him.

Ellis' cats are behaving differently and Ellis keeps getting calls from an unknown number.

Ellis had noticed that his cats were making their midnight door inspection earlier and earlier, and then they settled on a new routine in which they would "hover around the door at 10 pm, cry for about 15 minutes, and then wander off as if nothing's wrong."

OK, theses cats definitely know something is up. So Ellis then begins to receive unknown calls around 10:30 every night. He has the call log to prove it.

In an effort to regain normalcy (OMG, I would love a logical explanation right now), Ellis leads himself to believe that it is probably a telemarketer and that he could stop the calls by answering one time, but that is not at all what happened once he picked up the unknown call.

Nope, instead Ellis hears a "peculiar electrical static sound," and then silence.

But he did hear something. Ellis tweets, "Just as I was about to hang up, I heard a very small voice whisper, 'hello'." He goes on to explain the creep factor of this one-word greeting.

Naturally, Ellis hangs up the phone and turns on every single light in his apartment -- leave all lights on. ALWAYS.

Ellis continues to look for a logical explanation, and who can blame him? Who would want the answer to creepy happenings to be a ghost?! Ellis recognizes each incident on its own could have a logical explanation, but he can't shake the feeling that three continued weeks of torment just might be something more.

Ellis resolves to continue documenting everything (and terrify the entire internet). I am here for it, though, so let's keep going.

I would have just burned the chair, but Adam seems a bit more level-headed.

Luckily, Ellis was headed out of town soon, so maybe David will kick rocks too?

Ellis tweets that he's headed on vacation to Japan and hopes David will make himself scarce in Ellis' absence. But before he takes off, Ellis buys a pet monitoring camera to keep an eye on the cats. He explains the device is "basically a nanny cam that connects to the wifi so you can check in whenever you want."

If there is video evidence of a ghost, I. am. out.

It starts out innocently enough. The cats are playing around and not inspecting creepy ghost movements. All good, right? Not so fast. Ellis gets a motion alert around 11 p.m., but he doesn't notice anything moving on the camera. He watches a couple more times and then finally sees something -- most likely the work of David.

You guys, the chair is moving on. its. own.

Ellis tweets that he knows it's David because he keeps his apartment cool with AC -- no windows are open. With this new information in hand, Ellis decides to try not to panic and just turn his phone off. So much for that solution. He gets another alert about a half an hour later.

A decorative turtle shell falls off the wall seemingly out of nowhere.

So, chairs have moved, turtle shells fell down, and now Ellis is finally back home. He puts the chair in the hallway (oh, now David had a place to relax -- how nice) and hope that nothing else happens.

After all the conspiracy tweets, Ellis almost up and gets out of his apartment ASAP. Then, some more level-headed Twitter users point our that lighting is the culprit of the "missing chair." It's all bit much for Ellis, but he decides to try to get some sleep and lets Twitter know that he is "taking a xanax and going to bed."

OK, so this could all be an elaborate story to get an early Halloween scare, but if the video is legit and untouched, I wouldn't dare step foot in that apartment. Until Ellis updates his feed with more "Dear David" news, I suggest keeping every light on and removing any and all rocking furniture.