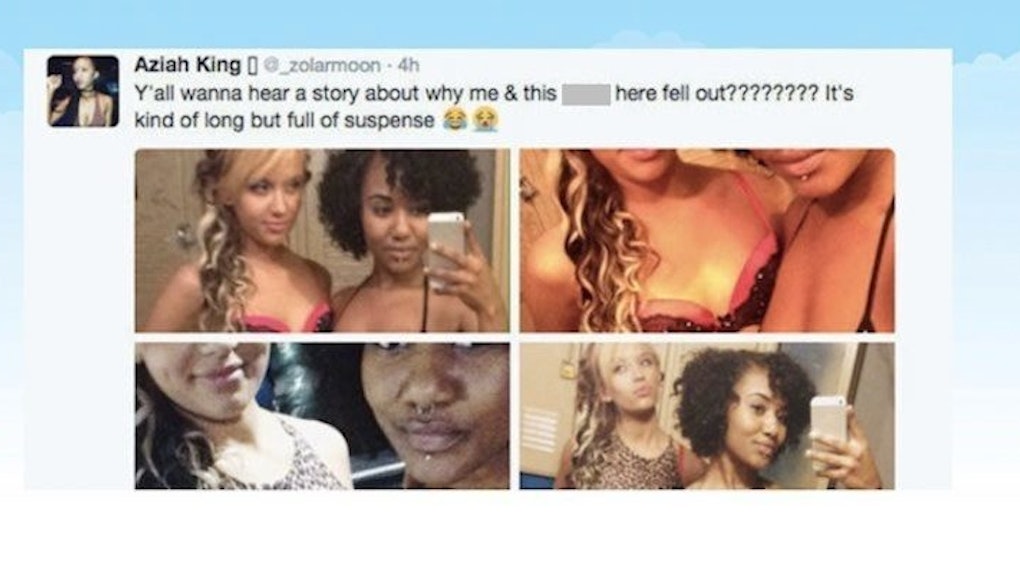 Zola is the modern-day Nicki Minaj/Tom Clancy mega-hybrid taking over the Internet you didn't know you needed in your life.

If you haven't read @_zolarmoon's Twitter story about two strippers, a heartbroken ex-boyfriend, a gun, several pimps and a “full nude typa bitch,” then you aren't living.

Seriously. You should be obsessed with Zola's Tarantino-esque romp through Florida.

THE ZOLA STORY IS SO FUCKED IM SCREAMING HOW IS THAT REAL — meron (@UNCLASSlFlED) October 28, 2015

SOMEONE BUY THE STORY RIGHTS TO THIS WOMAN'S LIFE AND MAKE IT A MINISERIES ON HBO STARRING TARAJI P. HENSON, CUBA GOODING JR. AND CARA DELEVINGNE!

I'm not gonna lie, it's a long read. It's over 140 tweets long with several pictures and LOTS of different spellings of f*ck.

But hear me out, this is the most enthralling thing that will ever come across your computer screen.

You will be 100 percent captivated by Zola and her whole. damn. story the entire time you are reading it.

I even cheered a little when I got to certain parts. It has action, romance, drama, the sentence “Jess, u sellin' puss for $100???? Pussy is worth thousands. U trippin” and photographic proof at the end. WHAT ELSE ARE YOU LOOKING FOR IN A STORY?

Make yourself comfortable because you're about to be taken on a BONKERS ride.

In case you're wondering if that story is true...

I was late to class bc I was reading that Zola/Jess/Jarrett/Z epic tale. Honestly Zola is the Homer of the Internet age. — tree witch (@luckyswell) October 28, 2015

Some even found unique bonds with a few of the characters.

jarrett from zola's story would be my best friend — some great tweets (@DRANKKAMINSKY) October 28, 2015

Seriously tho if what happened to Jess happened to a friend wouldn't you be concerned and angry tho ? — catatonic (@psychomotor1) October 28, 2015

OH, BY THE WAY, WE AREN'T DONE WITH ZOLA TALES (WOOOOOOO!) JUST YET.

I WANT IT TO BE TOMORROW ALREADYYYYY SOOOO BADLY.