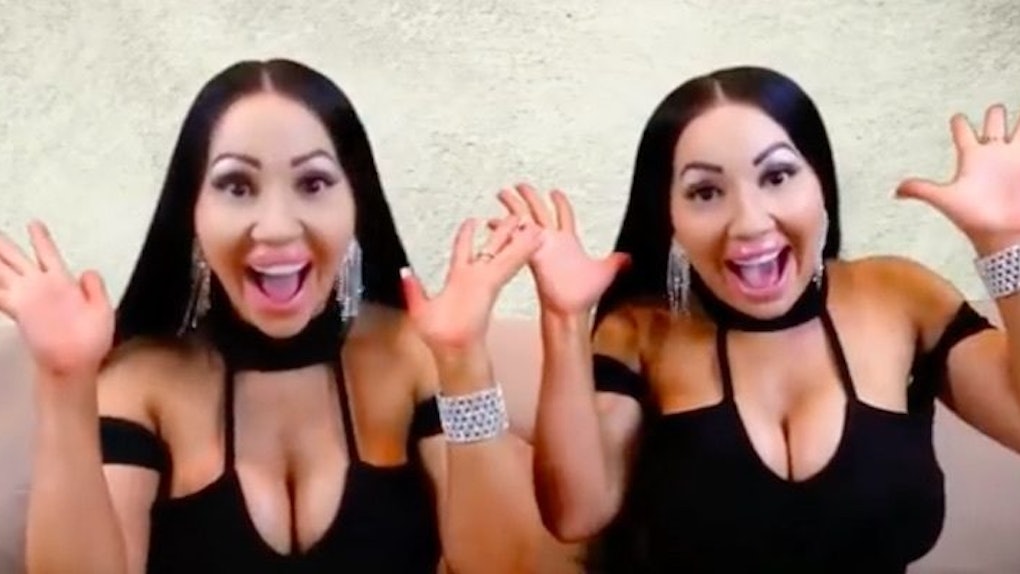 In a bizarre video that made me question if I was hallucinating or not, the "world's most identical twins" confessed their plans of marrying the same man.

In the synchronized footage embellished by odd cartoon segments, the 31-year-old twins talked about the road blocks they're sure to face while attempting to marry their shared boyfriend of five years, Ben Byrne.

After watching the duo discuss their confusing wedding plans, I was left at a loss for words.

For starters, the twins made it clear they're going to need to design two dresses for the wedding, and that their beloved boyfriend is going to need to buy them two separate rings (what a tragedy).

However, they laughed the ring comment off because Ben buys them jewels all the time. In the video, they both flashed their identical bling for the camera, and said,

Ben always gets us rings all the time, our jewelry is the same... we're sending him broke!

All jokes aside, the twins actually have no idea where they can simultaneously marry Ben, and ask their followers to leave suggestions in the comments section of the YouTube page.

In the video, their exact words are,

Many debate. Is it possible? Can it work? I don't really know. But we've actually heard in Tucson you can get married.

Um... was this a spur of the moment decision, ladies? Because it seems like you still have a lot of thinking and planning to do.

During the odd video, the women digress while talking about the wedding dresses they're going to design for their big day and get into their new endeavor of eventually becoming fashion designers.

Then, they abruptly talk about potentially getting hitched in Las Vegas and continue their ongoing question about where they can both marry Ben – because they still "don't know how they can."

A few moments later, the twins suggest any followers who are judging their decision to marry the same person keep their comments to themselves. BURN.

One of them (I have no idea which one), says,

I think it's beautiful. It's not weird to us, it never will be and we're happy. We're not hurting anyone.

OK, I know I sounds harsh... but, I get it. If Ben's truly "twinning and winning," then do your thing, girls. More power to you.

The more the merrier, right?