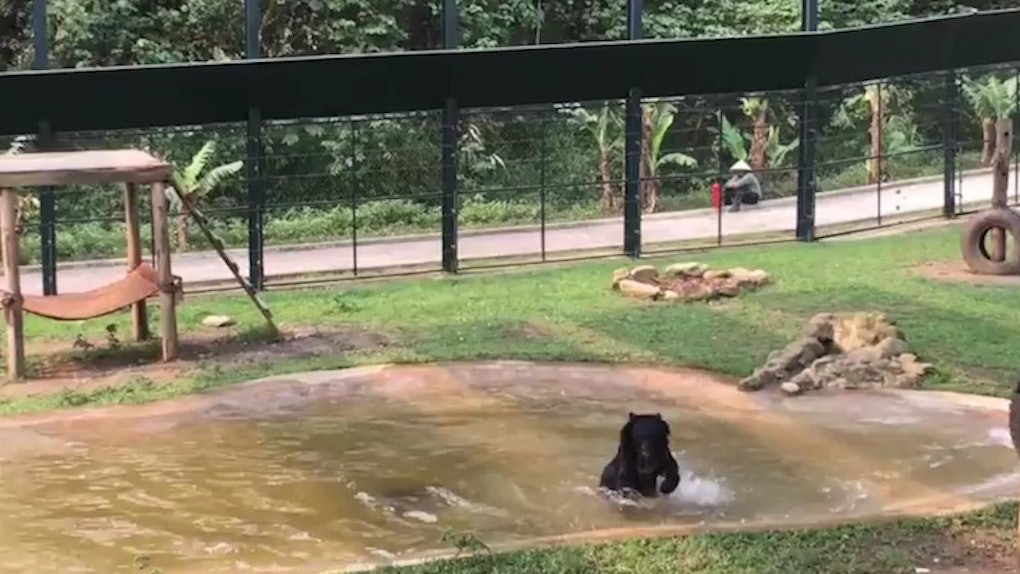 A bear splashed and frolicked around his new aquatic playground after spending years in a cage.

This clip shows Tuffy the bear spending one of his first days outside at Animals Asia Foundation's Vietnam bear sanctuary.

According to Animals Asia, Tuffy is one of seven bears rescued in September 2015 from a bear bile farm, where he was given little water and confined to a metal cage.

These farms extract bile from the bears' gall bladders to sell it as traditional medicine. The whole process causes severe damage to the gall bladder and creates gallstones, leaving the bears in excruciating pain for years. Tuffy had to have his gall bladder removed along with three fractured teeth.

His paws were also dry and cracked due to dehydration and walking on metal bars, Animals Asia Bear Manager Louise Ellis said.

Approximately 1,200 bears are currently prisoners of bile farms in Vietnam, and over 10,000 are imprisoned in Chinese bile farms.

Citations: Tuffy the bear jumps for joy after rescue from torturous cage (Daily Mail), VIDEO: Freed from a bile farm – is this the happiest bear ever? (Animals Asia)