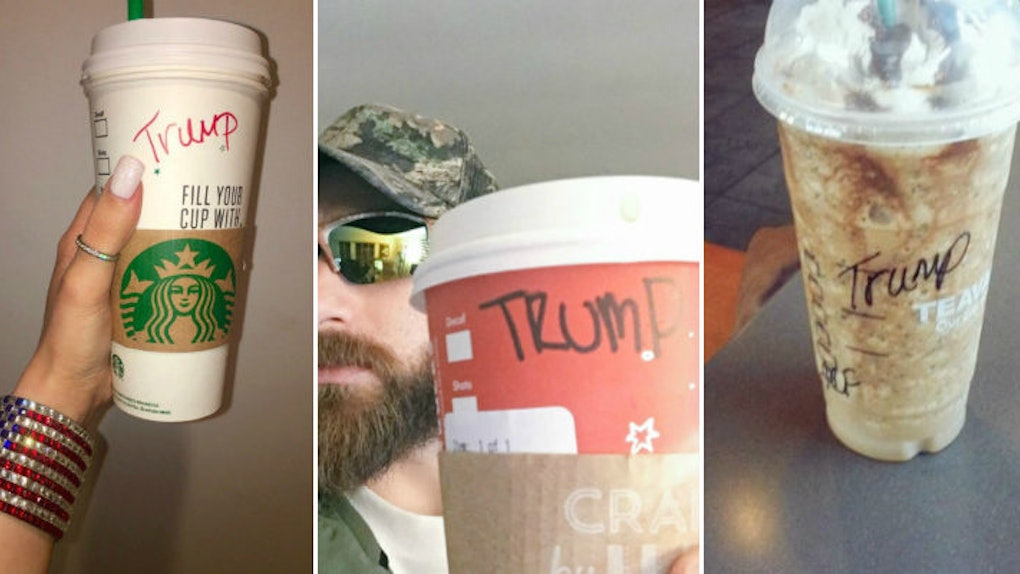 I'm not sure what Trump supporters are trying to accomplish here, but apparently they're trying to send a message to Starbucks by... continuing to give their money to Starbucks.

Trump fans are demanding that the baristas (who are often young, underpaid employees trying to make ends meet) write "Trump" on their cups instead of their real name.

#TrumpCup took off on Twitter on Friday after a white supporter of Trump was filmed shouting at employees. He was complaining about racial discrimination while telling everyone in the store he voted for Trump.

Apparently, the outburst followed a delay in the making of his coffee.

This is not the first time many Trump supporters have tried to protest the coffee chain.

Howard Schultz, the CEO of the company, endorsed Clinton, and even Trump called for a boycott after Starbucks' holiday cups weren't festive enough.

There's nothing like harassing a barista to get your point across.

Give them a lot of money today -- then go right back to protesting!

One Trump supporter had the police called on him.

Honestly, this is not surprising. If you're causing a scene in a place of business like this, they have every right to call the cops on you.

A spokesperson for the company told Mashable,

Over the years, writing customer names on cups and calling out their names has been a fun ritual in our stores. Rarely has it been abused or taken advantage of. We hope and trust that our customers will continue to honor that tradition. We don't require our partners to write or call out names.

So, no, they are not required to do anything you want.

So, if you do want to do the #TrumpCup thing, just don't film baristas without their consent, and don't encourage others to do that as well!