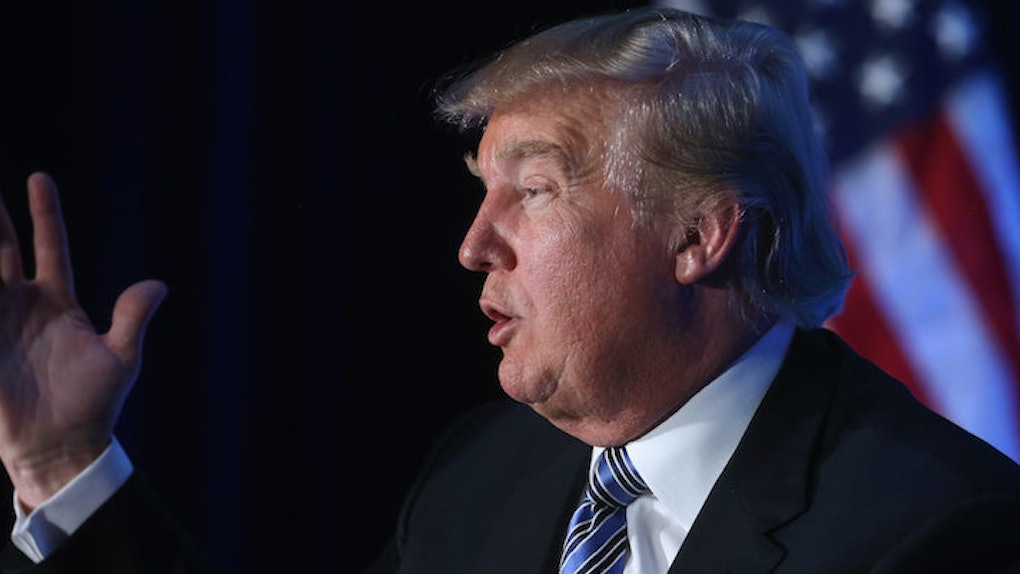 What I Want Donald Trump To Know, From A Child Of Immigrants

They are targeting each other, as well as certain groups in America.

Republican candidate Donald Trump has been very outspoken about his stance on immigrants.

For Trump, one of the main ways “to make America great again” is through his immigration reform plan.

In it, Trump outlines three main points on how to do so: build a wall across the southern border, enforce laws passed in accordance with our Constitutional system of government and implement immigration plans that improve jobs, wages and security for all Americans.

At a glance, Trump’s proposed immigration reform seems to work in the country, but what bothers me is how Trump plans to implement these ideas.

Trump makes it seem this is an easy solution to the immigration "problem." But this issue is more than just black and white.

If a plan like this goes through, the economy would be affected, due to the number of people who would potentially be deported.

Do we ignore the issues of the families that may be separated?

As someone who was born in the United States of America to foreign-born parents, this type of immigration plan angers me.

My parents immigrated to the United States, and I consider myself as American as someone born to American-born parents.

While Donald Trump seems to think this type of immigration plan is what the United States needs, it hinders our ability to be seen as an accepting country.

We have made strides in the equality department, but it looks like more strides need to be made for everyone to feel included.

While Trump classifies all immigrants into one group, each individual story is different.

At the end of the day, the way Trump talks about immigration in general affects us all.

First, thank you for bringing such amusement to my daily life, as I follow your political aspirations.

With that being said, it saddens me to know there are people such as yourself who believe all immigrants are criminals.

I wish you would realize that while there are some criminals who happen to be immigrants, this is not the norm.

In fact, newcomers to the United States are less likely than those born in America to commit violent crimes or be incarcerated.

I’m a first-generation Chinese-Indonesian individual from New York City. My Asian culture greatly influences who I am as a person, and I have a connection with my parents’ home countries: the food, language and culture.

I was born in America, and am very proud of my nationality. While I have a connection to my parents’ home country, the United States of America is the place I call home.

For you to label me as an "anchor baby" and diminish my connection with this country is heartbreaking.

It’s ironic to me that you’re from my own birthplace: Queens, NY.

It is a borough known for its multiculturalism, and you are unaccepting of immigrants living in this country.

Your own mother and two of your wives are immigrants. Yet, according to you, immigrants are "bringing drugs, they're bringing crime, they're rapists and some, I assume, are good people.”

You choose to see the negatives and diminish the positives. Why?

If your proposed immigration plans were in effect during my time of birth, I would not be an American citizen. I would not have the opportunities or rights I do now.

For this, I am forever thankful.

In your eyes, I should be stripped of my citizenship because my parents were illegal immigrants at the time of my birth.

Also, my parents probably only had me because they wanted American citizenship.

Simple. Everything is black and white, right?

Look, Mr. Trump, I did not ask to be born in America.

In fact, I didn’t ask to be born at all.

My parents decided they wanted a child, and that’s where I came in. For you to label me as an "anchor baby" and imply my birth is solely for my parents’ desire to become citizens is heartbreaking.

It doesn’t matter that my parents have provided me with a loving life. They only did so because I was needed for citizenship, right?

Yes, it’s true my parents were illegal immigrants at the time of my birth.

All I see are two adults who were trying to escape the tragedies of their home countries and provide themselves with a better life.

I’m assuming you see two criminals who decided to have a baby so they could have a chance at obtaining American citizenship.

What you don’t know is my dad had a work visa before, and that work visa gave my mom the opportunity to come to the country.

Yes, my parents overstayed, and they paid the price for it.

Am I ashamed of having parents who were once illegal immigrants? No.

In fact, I am very proud of who my parents are.

I bet you’re thinking they used me to gain citizenship, right? Wrong.

After realizing there was no chance of getting citizenship and a high risk of being deported, my parents immigrated to Canada, where they became Canadian citizens.

What you don’t understand is my parents moved back to Indonesia permanently to try and raise me there when I was 4, until our church was burned down, until our family being Chinese threatened our lives and until I had to leave school because they were scared of the men marching up and down the street.

That doesn’t matter to you, though, does it?

You make it seem so easy.

Illegal immigrants don’t belong in the country and should be sent back to their home countries.

What about the repercussions to the children of these illegal immigrants who already have American citizenship?

The ones who have no real connection to their parents’ home countries?

The ones who have known America as their home their whole lives?

Do you split them up? What about illegal immigrant children? Do you send them back?

There are many questions that can be left unanswered. There is so much gray area you refuse to acknowledge.

I’ll hand it to you, though.

Through all the comments you have made, I do agree there is an influx of illegal immigrants in America.

Something needs to change.

Eleven million undocumented immigrants need to be looked at.

Do I think that of these 11 million individuals, all are criminals?

No. Am I naive and think all illegal immigrants are honest? Of course not.

There will always be outliers, but is that a reason to not give anyone a chance? Absolutely not.

I choose to give everyone the benefit of the doubt, and I believe these people are in the country trying to achieve the same thing as everyone else: a better life.

Yes, we do need to enforce laws passed in accordance with our Constitutional system of government. You also need to open your eyes and see each case is unique.

That’s a step up.

If you’re open to legal immigration, then how do you not see the many layers attached to illegal immigrants? What I think is, we need a better way to streamline the immigration process and help those who are in the country.

What you see as black and white, I see as shades of gray. You stand on a podium, categorizing all illegal immigrants in one group.

You don’t see that many of them are trying to give their children better lives. The future of America is what will make America great, and threatening the lives of their parents or abandoning those born in the country won’t achieve this.

You want to build a wall across the southern border to stop illegal immigrants from getting in our country.

The way I see it, those who want to escape will stop at nothing. I remember feeling constricted as a teenager and pushing my parents’ last nerve as a form of rebellion.

What do you think a wall will do for people who actually have real problems? Instead of tearing down individuals, how about you try actually helping people?

Do not categorize illegal immigrants and those of us born in the US to illegal parents into one mass group.

Once you stop trying to kick immigrants out of the country and start finding a plan to help them instead of tearing them out, then maybe I’ll listen to the other bullsh*t you say.

I’m assuming if you were on "The Apprentice," this would be the part where I'd say, “You’re fired.”

Olivia Yusuf (Done with your bullsh*t)