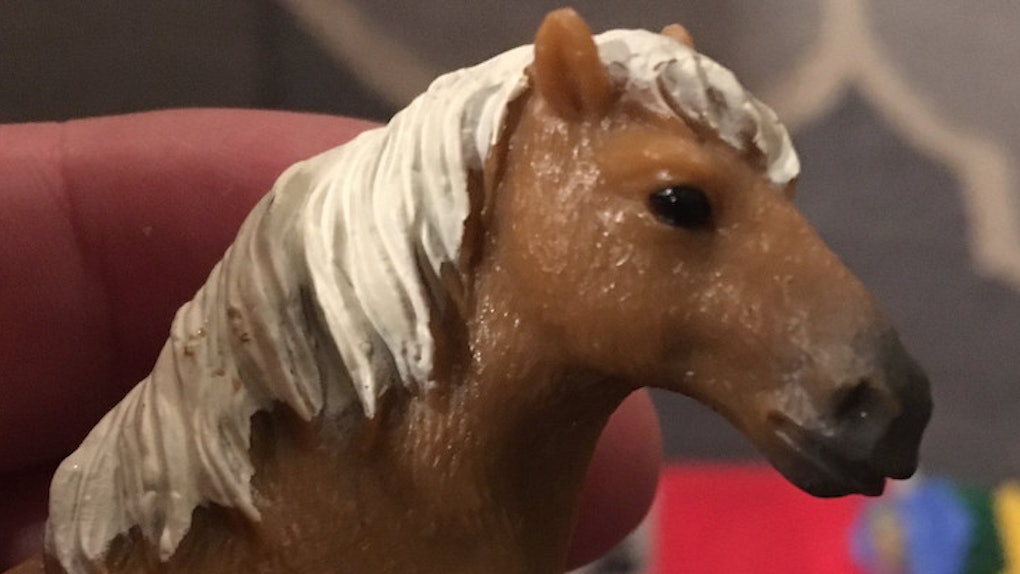 This Toy Horse's Penis Is Way Too Detailed

OK, the "hung like a horse" joke is way too easy with this one.

Bob Velcoro was the Twitter user who originally shared the hilarious photos putting plenty of emphasis on a toy horse's private parts.

Not sure why this toy needs this level of detail.

The toy horse, made by Canadian toy company Battat, features a penis far too realistic than necessary.

Oh, and just in case you were wondering, yes, this is actually news.

Behold the viral tweet exposing a toy horse's detailed penis that no child should ever have to see.

The tweet has since racked up over 11,000 retweets and 16,000 likes in under 24 hours. It's safe to say people are outraged by this toy horse's genitals and rightfully so.

I mean, WHY on Earth does this TOY HORSE that was made for CHILDREN have a realistic-looking penis? Barbie doesn't even have a vagina. What the hell is going on here?!

To make things even weirder, the Twitter user followed up with another tweet explaining that out of all the other toy animals, the horse was the only one packing.

At this point, I personally have a ton of questions that no one can answer (except for Canadian toymaker Battat). Let's list a few of them, shall we?

OK, first and foremost, why does this toy horse have a fucking dick? Let's start there. Secondly, is it common for toy horses to feature dicks in Canada? Is that, like, a thing?

Lastly, why is it a human penis? Someone needs to study the anatomy of a horse a little better before even thinking about touching the 3D printer.

Of course, Twitter just couldn't take the toy horse penis. It's just so confusing, so unnecessary... so WTF.

Then, there were people who thought it could have been placed there to go viral on the internet. If it was, it might be working.

Look, I don't know what the fuck is going on here, but what I do know is that Battat has some explaining to do...