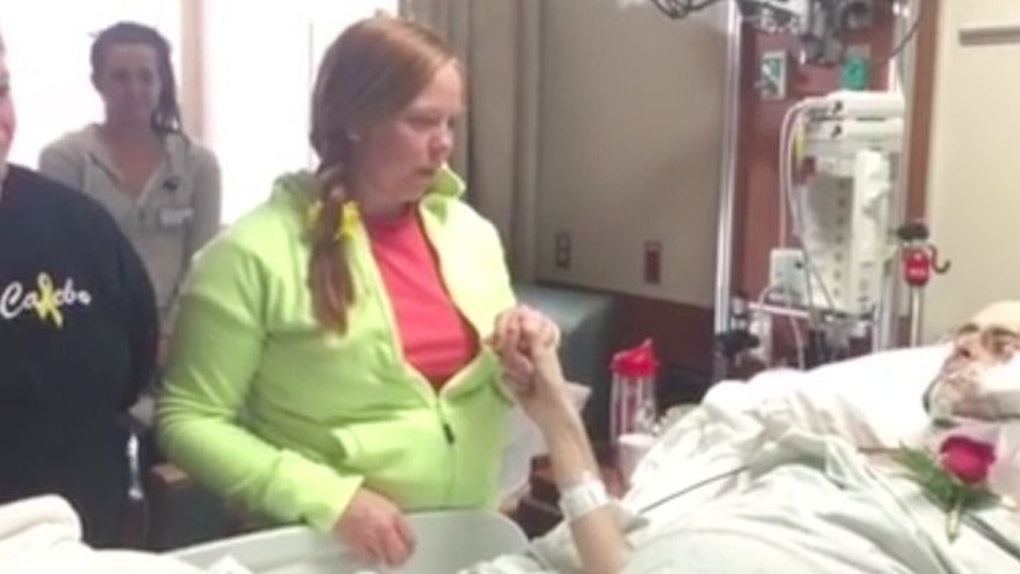 When Caleb Hanby visited the dentist in the hope of healing a muscle issue causing pain in his jaw, the doctor discovered the source of his pain was cancer.

As Hanby received chemotherapy treatments for his rhabdomyosarcoma, his girlfriend of a year, Bethany Davidson, stood by him. By August, the couple was engaged, but wedding plans were soon derailed when the majority of savings were needed to cover Hanby's medical care.

A caring friend entered the pair in a radio contest, and sure enough, the couple beat out 7,500 contestants for the grand prize of $100,000 for a dream wedding.

With the wedding date of October 11 fast approaching, Hanby's health continued to decline. Last week, the groom-to-be took a turn for the worse and landed in intensive care.

Concerned he would not make it to the set date, the couple, their families and hospital staff threw a spontaneous ceremony.

Doctors and nurses filled out the wedding party, and family stood by as the Hanby and Davidson made it official.

A friend filmed the union and shared it on Facebook. During her vows, Davidson told Hanby,

You've taught me more about love in this last year than I ever thought was possible… I am honored to have you as my husband. No matter how much time we have together, you will always be the love of my life.

On Thursday morning, the 28-year-old died with his wife and family at his bedside.

We didn't want to get married because we had to. It was because we wanted to.