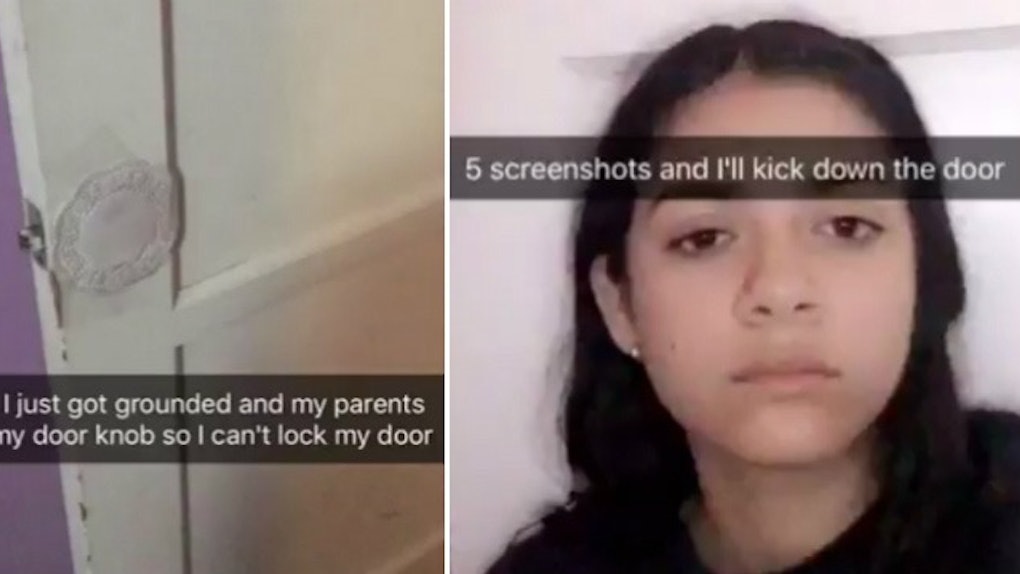 Parents' removing a teenager's bedroom doorknob is a trick as old as the book.

Regardless of what you did to get into that situation, most of us have experienced the sheer embarrassment of not being able to lock our room when we're on the phone or... whatever kids do nowadays behind closed doors.

For some reason, 17-year-old Alexa Pacheco's parents took away her doorknob, but they still let her have her cellphone. And thank God they did, because after she accidentally closed her door all the way, she realized she was trapped inside.

That's where we win, because we get to experience the whole thing through the magic of Snapchat.

While she was taking a shower and changing, she shut the door, naturally. But then she realized she couldn't open it again, so she called her mother in a panic and was told to wait until they came home.

I want to call out her friends for not providing those five screenshots to ensure she would kick down the door.

The 43-second-long clip has every range of emotion...

From the humorous moment she's grounded to the terrifying moment when she realized not even her parents can get her out.

For about five seconds, I was convinced Alexa would be forced to spend the rest of her life in that room...

Eventually, as she always does, Beyoncé saved her with "Survivor" blasting when she was finally released from her teenage prison.

OK, let's get this girl an Oscar, right? I laughed, I cried, I celebrated.

Hopefully, her parents learned a valuable lesson from this grounding, and Alexa will never go another day without her doorknob.

Or at least, hopefully, they make sure if she does lose her doorknob again, she creates another masterpiece on Snapchat.

Citations: Grounded teen gets trapped in her room and records her thrilling escape (Mashable)