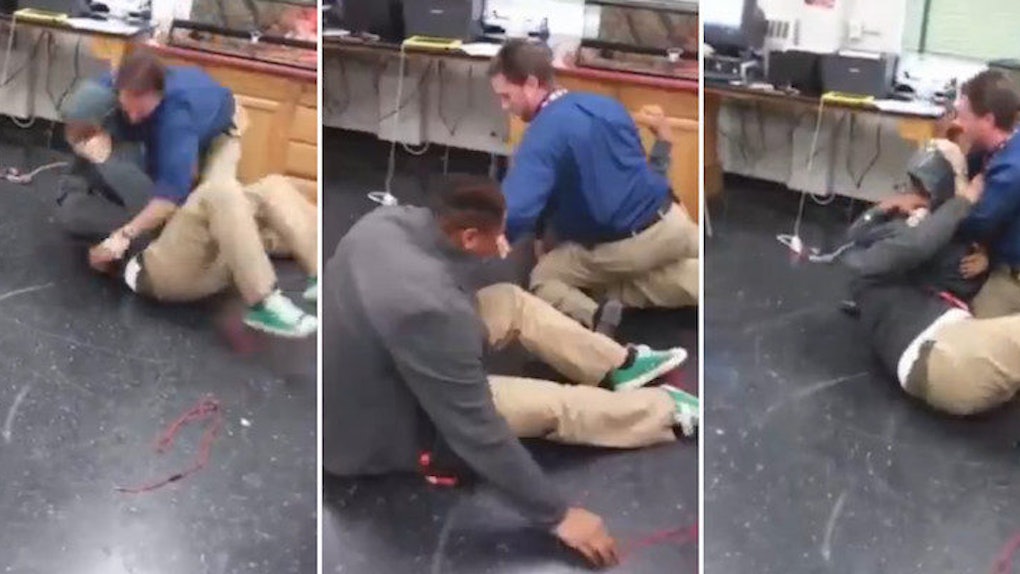 The first rule of Fight Club is you do not let your teacher break up the fight because that scores you a big, fat zero on the cool scale.

These guys ignored the first rule and incurred the wrath of -- hm, let's call him -- Mr. McGregor, who apparently has a deep love for the UFC.

The teacher actually pulls a UFC-style choke hold on one of his students before shouting the most un-teacher phrase ever:

STEP OFF! Step off or you're going to go night night!

Let's take this from the top. Obviously, the whole thing was caught on camera because this is 2016.

One student whipped out his phone the moment he saw tension mounting (thanks, student).

As suspected, violence erupts in the most manly of ways.

Look at this raging casserole of testosterone. So much raw anger. So much man.

But -- hold on -- what's this? Folks, it looks like we have a new contestant entering the ring.

Ladies and gentlemen: It's Mr. McGregor from science class! AND THE CROWD GOES WIIIIILLLLLD!

Uh-oh, it looks like he's going to pull out his favorite choke hold. These guys are done.

Can we talk about their pants please? It's a sea of beige out there. I can't tell where Mr. McGregor starts and where one students ends.

Show's over, folks, the fight has been defused in the most badass way for this nerdy teacher. He earned at least seven awesome points for the way he handled that.

Meanwhile, the students are left to pick up the shattered remains of their pride off the classroom floor.

I'd love to give you a bit more information as to when and where this fight took place. But truth is, details are scant, and for once in your life, can't you just be happy with a good fight video where no context is needed?