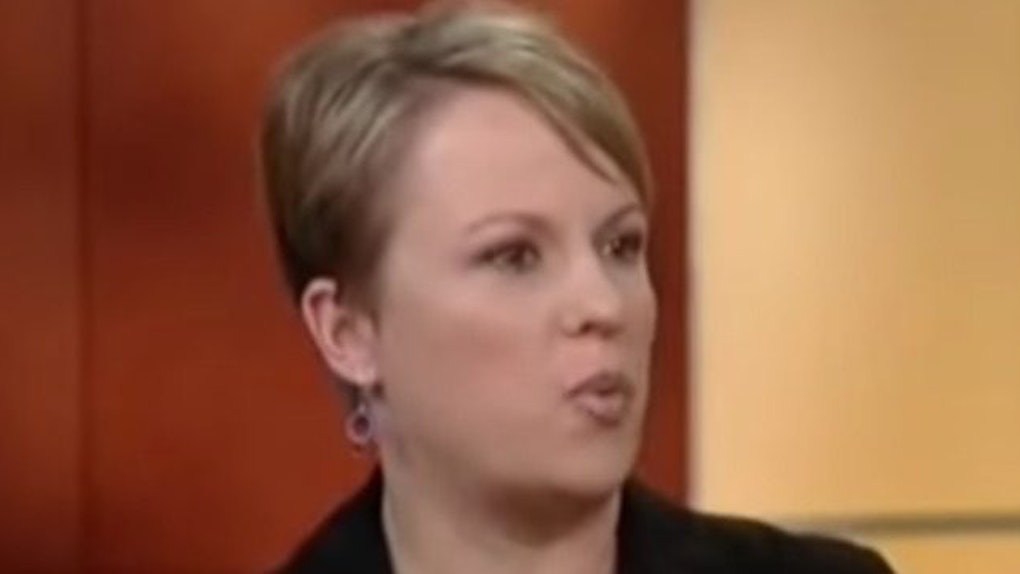 Suzanne Venker Says Women Should Be 'The Beta' In Relationships

This past Thursday, February 9, author Suzanne Venker appeared on Fox News' "Fox & Friends" to talk about her soon-to-be-released book "The Alpha Female's Guide to Men & Marriage."

To give you an example of what this chick's all about, she boasts on her website, "Hi! I'm Suzanne Venker. I help women make smart choices in life and in love by imploding cultural narratives that undermine this goal."

And in her chat on the TV segment, she definitely expanded on those "cultural narratives" she's hoping to "implode."

Check out the interview for yourself here:

Now, if you didn't feel like watching that whole thing, allow me to share some highlights with you.

At 0:36 in the interview, one of the male hosts, Steve Doocy, prompted Venker by saying, "One of the problems you say is, when men and women enter a relationship, in the beginning, generally the man is the alpha and the woman is the beta."

So, that's how almost all relationships start, right? You, as a man, make the phone call. You pay the bill. You actually even ask the woman to marry you, right? ... So, in that natural state, a woman is much more receptive to your energy. They are on the receiving end. And I think what happens over time after you have been married a really long time, especially once kids come into the picture, is that women get into this mode of just sort of micromanaging everything. They're working, they're not working, but if they're not working, they're raising their kids, so they're working at that, and therefore they're micromanaging that. And that's all fine, but if they don't switch over into wife mode, kind of back where they were when you started, I think the relationship begins to deteriorate.

Around 1:26, Doocy clarified, "So the beta becomes the alpha, and then the man becomes confused, and maybe she should be the beta?" to which Venker replied with a simple, "Yes. Precisely."

Just a general problem I'd like to note with her words throughout the whole interview (apart from her blatant sexism) is that she refers to women as "they" instead of "we." Like, what's the deal here?

So just how does a woman go back into the "wife mode" Venker mentioned? Well, at 2:15, she explained,

The husband needs from the woman softness instead of hardness. So happiness instead of anger. Being more compliant and less dictatorial. Basically not telling him what to do. I don't know how else to put it.

Did you hear that, ladies?! If you're feeling angry after a tough day at work, TOO FRICKIN' BAD.

Just suck it up and put a smile on your face because that's what your MAN needs! If you won't have time to pick up the kids from school because you'll be working, and he wants to golf, don't tell him to pick up the kids! Figure it out! That's your JOB. You're in wife mode!

Needless to say, the female host, Ainsley Earhardt, was less than pleased with Venker's theory.

At 3:20, she asked, "As a woman, are you getting some fall back? Because, it's like, I don't expect to hear this message from a woman because we all think it's the man's problem [laughs]."

And of course, Venker had an answer for that, too:

That, to me, is the problem — that we're constantly pointing fingers to the men, when I'm saying we're the ones who are actually kind of the problem.

Anyone else hear that, women?! We need to stop pointing our fingers at our wonderful, wonderful men, when we are so clearly the problem!

I'm sorry, what century are we in?

Citations: Fox News Guest: Women Are Naturally 'The Beta' In A Relationship (The Huffington Post), Sexist Fox & Friends Segment Hosts Author Claiming Women's “Natural State” In Marriage Is To Be The “Beta” (Media Matters for America)