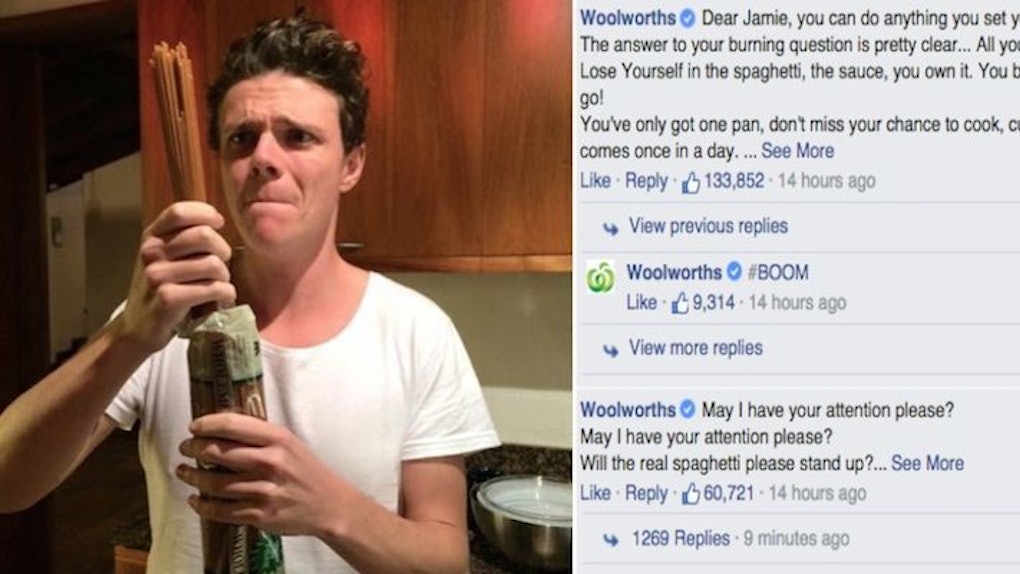 Everyone is familiar with the feeling of walking through a Woolworths Supermarket and wondering why it feels so stodgy and uptight.

What do you mean, "What is Woolworths?"

Are you not familiar with the Australian supermarket chain famous for its 933 fresh and friendly locations?

That's insane, but I digress.

One young man recently tested the austerity of Woolworths and, boy, was he surprised. Jamie McGloin took to the grocer's Facebook to pen a product review harboring a strong “8 Mile” vibe.

Yesterday I was searching for food to make mums spaghetti. I was nervous, my knees were weak, my palms were sweaty and to top it off, I had a vomit on my sweater already. To be honest, I was ready to drop bombs, but I kept on spaghetti what I wrote down. I feel I had one shot, one opportunity and I let it slip. I could have seized everything and I left with nothing but a brown onion and tomato paste. I lost myself in the spaghetti because I had spaghetti on my spaghetti already. Snap back to spaghetti. Oh there's goes more spaghetti!! So today I went back to purchase some spaghetti, instead of finding spaghetti in the packet, I found this. It was spaghetti!!!! What should I do with it? Should I return the spaghetti?

The chain replied and, egg on Jamie's face, it proved Woolies is one ripper spot for tucker and, every now and then, takin' the piss.

What do you mean, "That makes no sense?"

Basically, Woolworths proved it could take a joke and dish one out equally as well.

The posts went viral and prankster Jamie McGloin shared how being Internet famous changed his life.

Has life changed since i've become internet famous? Yes, it's drastically changed. I can't walk down the street anymore... Posted by Jamie McGloin on Monday, September 28, 2015

He did it all for the sketti.