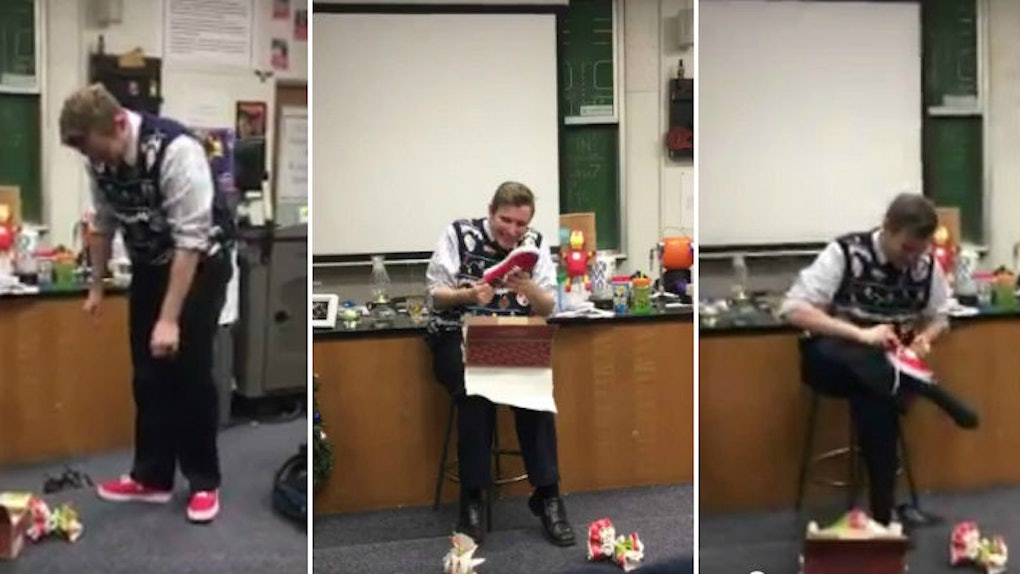 The only thing I have ever given my teachers are headaches, but what these students did for their psychology teacher is probably one of the cutest holiday videos this year.

A class at Edgewood High School in West Covina, California all pooled their money to buy their teacher, Taylor Kerby, a very special gift.

Thankfully, cell phones weren't banned and we got to see this adorable video.

When school started up this year, Kerby saw one of his students rocking red Vans and said he wanted a pair too, but it was something he wouldn't really buy for himself.

A few days before the holidays, his students thought it would be the perfect time to surprise him with his own bright red pair of sneakers.

For some reason, people fell in absolute love with the teacher lacing up his new kicks and modeling them for his students.

Kerby ignored his mismatching socks -- which he says he doesn't have time for -- when he opened the gift so he could immediately try on his new shoes. He said,

Oh my gosh. Guys, this is so sweet. I love them.

About 3 months ago, during a lecture, I complemented a student on their red Vans. Off handedly, I told the student I used to have shoes kind of like that, really liked them, but due to my great "cheapness" hadn't bought new ones. Today, my 6th hour class gave me a Christmas present. They had pooled their money to buy me a new pair of red Vans. In truth, they are the nicest pair of shoes I've owned in some time. I'm very touched by their memory and thoughtfulness. Merry Christmas Sixth Hour.

He admitted he was a bit weirded out when his students asked him his shoe size, but it looks like it all worked out perfectly.