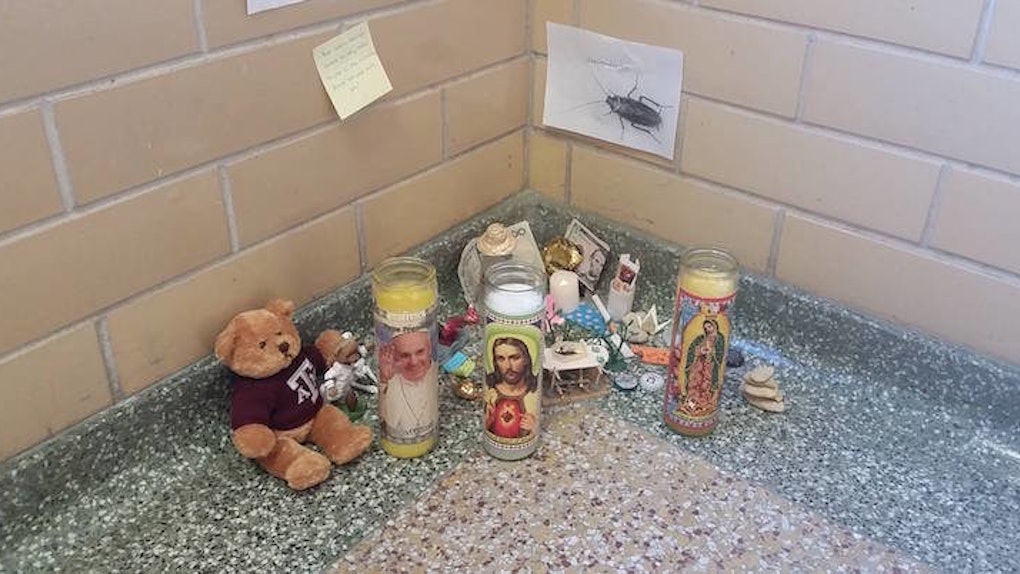 Cockroaches have a reputation for being completely indestructible. It's often said the little critters could survive nuclear fallouts.

This, of course, is not entirely true. Cockroaches, like all other animals, die.

Late last month, a roach living in the hallway of the anthropology building at Texas A&M University did just that.

After two weeks, the roach hadn't been moved. So, someone decided to build a little shrine for the dead roach, giving it a makeshift headstone and the name Rosie.

On December 3, Michael Alvard, an associate professor of anthropology, posted a picture of the roach shrine to Facebook.

That's when everything started.

…leaving flowers, notes and coins for the fallen insect to bring to the beyond.

Someone even left Rosie a cigarette.

As the shrine continued to grow, Alvard said in a Facebook comment, “I had nothing to do with the genesis of this memorial.”

By December 4, someone placed Rosie in a tiny roach-sized coffin...

...and more and more students dropped by to pay their respects.

The memorial continued to last…

…until finally, after about two weeks, Rosie was cremated.

About a dozen students attended the funeral, with more reportedly stopping by throughout the day to say their last goodbyes.

Citations: People Built A Shrine And Held A Funeral For This Dead Cockroach Someone Forgot To Clean Up (BuzzFeed)