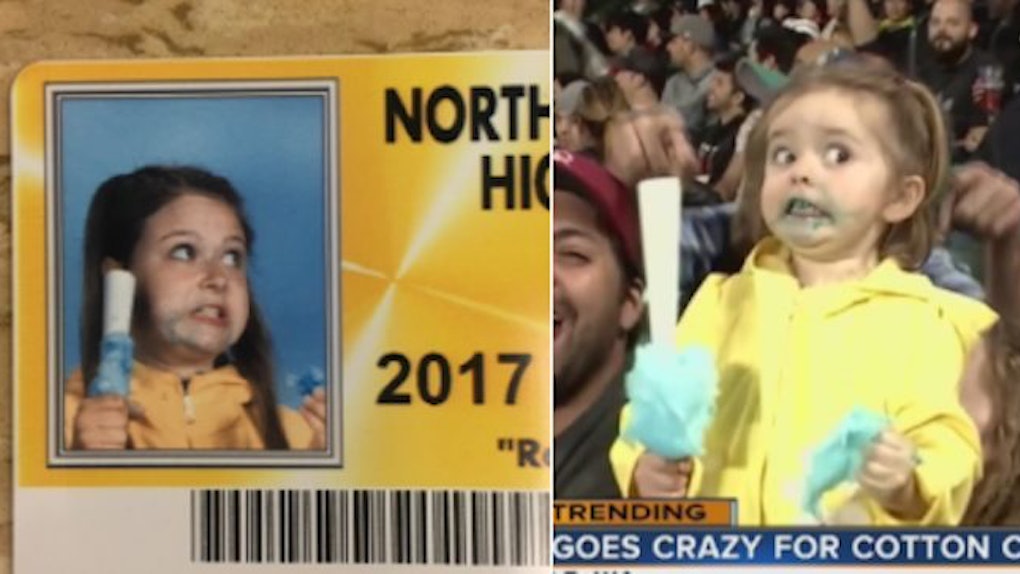 Remember when school picture day meant you wore your "nice" top and hoped that your 7 a.m. makeup lasted until you finally took your picture after lunch? Well, apparently those days are long gone. A Michigan high school has a senior tradition where the students wear costumes in their ID photos, and the hilarious end results made their way to Twitter.

When I was in high school, your school ID basically got you into buildings and was taken away when you did something that got you into detention, but apparently, IDs have gotten way more exciting. North Farmington High in Farmington Hills, Michigan, wins the award for "Best ID Photos Ever" thanks to some very creative seniors. Apparently, they get to celebrate their last year of high school by dressing up in whatever pop culture costume they'd like for their ID picture -- NFH must have some pretty cool administrators.

The students took to Twitter to share their best pictures by using the hashtag #NFID18. If you are looking for some laughs today, these pics are sure to bring them because the students did not half-ass their costumes. Seriously, these seniors took their commitment to stay in character very seriously, and it paid off big time.

Senior year is all about hanging out with your Friends.

I think what's most impressive about this picture is that she was probably like 3 or 4 years old when this episode aired. Props on the throwback.

The '90s were a big source of inspiration for the seniors.

Oh, he did do that -- suspenders and all.

He made his family homework disappear.

You can probably tell what these seniors' favorite movie is.

Hey, without the villain, how would you know who the good guys are?

Another cinematic classic made its way to the photo booth.

You can usually find these two waiting for the school bus at Platform 9 3/4.

You can thank YouTube for these hilarious (and spot-on) costumes.

It's good to start practicing now so you don't burn your hair off on prom night.

I'm convinced she hired the cotton candy girl to pose for the picture because they are practically the same person.

Twitter was there to give these students all the props.

People could really not wrap their head around the uncanny resemblance of cotton candy girl.

From the looks of it, these seniors are off to a creative and hilarious start for their final year of high school. From '90s icons to the internet stars who went viral in the 2000s, these students made sure to cover a lot of ground with their costume choices. I must say, it is really cool that the administrators give the seniors this fun opportunity to be imaginative and have a few laughs as they begin the school year.

Thanks, NFHS, for the laughs and for some serious costume inspiration. Now, don't be late to homeroom!