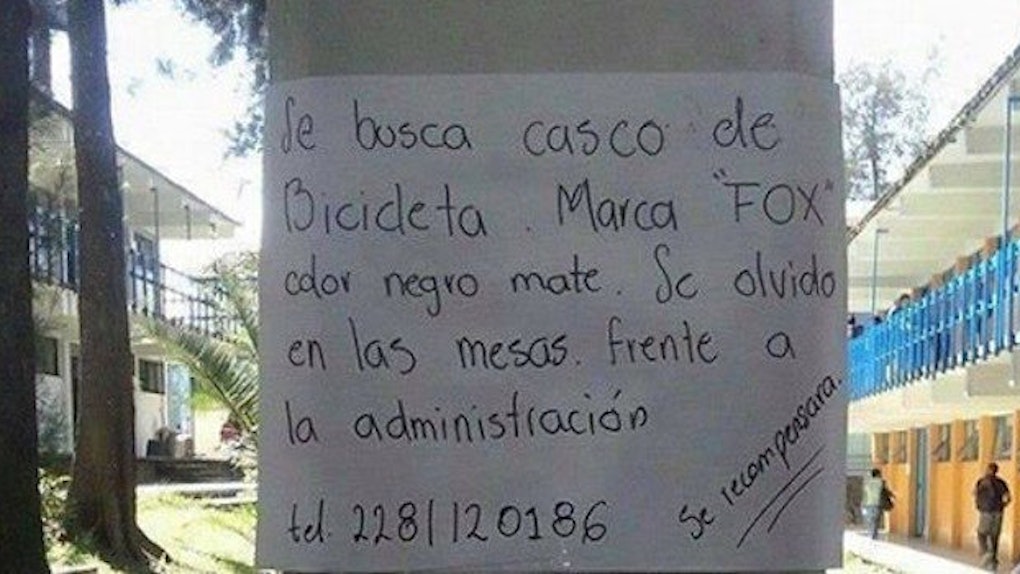 This is herd mentality at its weirdest ever.

Late last month, a student from Mexico's Universidad Veracruzana posted a flyer to a pole in the engineering school's quad looking for a lost bike helmet.

The note (translated by BuzzFeed) read,

On the search for a dark black 'FOX' brand bicycle helmet. It was forgotten at the tables in front of the administration. You'll be rewarded.

A contact phone number was also provided by the helmet's seeker.

For reasons still unseen, students at the university saw the lost ad as an opportunity to launch a bizarre but admittedly hilarious prank, with the aforementioned elusive bicycle helmet at the center of it.

This was the student's original, unassuming note.

Immediately after it went up, similar flyers were posted offering to sell (and even resell) the "FOX" helmet.

More joined in on the joke…

...and soon, the entire pole was covered in flyers about the student's lost helmet.

When there was no more room for signs, the students created a sort of mini-shrine for the helmet.

Some left prayer candles and rosaries.

Signs reminding students #WeAreAllFOX were hung in the halls of the Mexican university...

As for the poor, helmetless person who put up the poster?

The person was harassed by pretty much everyone, thanks to the phone number casually put on the original sign.

And, no, the helmet was not found. Yet.