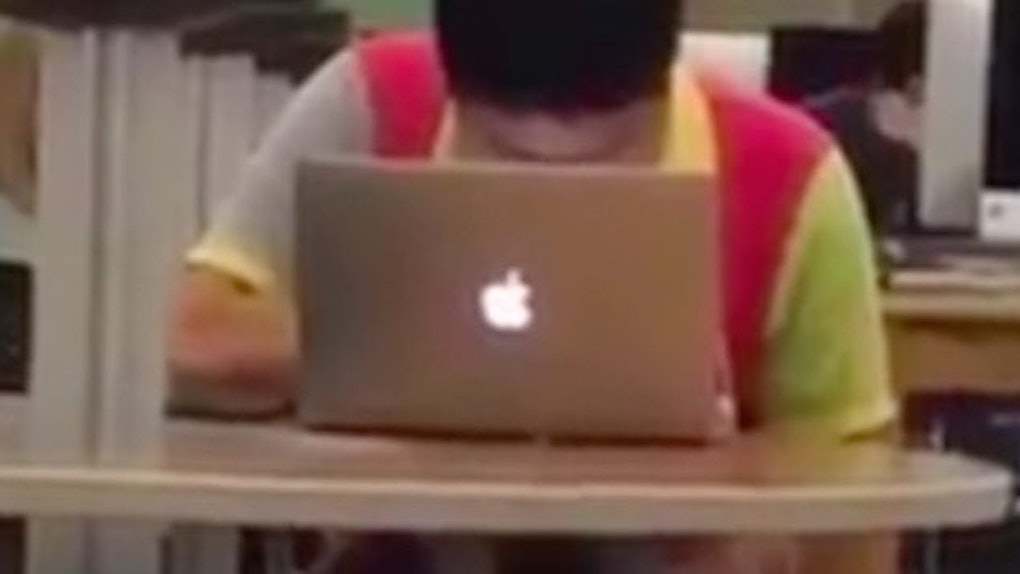 There are a lot of things you should never, ever do in public.

Well, it turns out that security guard isn't the only shameless dude who's been caught with his hand down his pants in a very public place.

Someone recently posted a video on Twitter that shows a student engaging in some extracurricular activities in the school library.

That's right. A group of students were hitting the books during finals week, when they glanced over and noticed something odd was happening underneath the table behind them.

As the camera zooms in, you can see a young man come into focus. He seems to be doing way more than just working hard on his final paper.

Yep, this bold bookworm appears to have his hand shoved down his pants, and based on his vigorous up-and-down motions, this kid is not innocently adjusting his underwear.

Instead, it's pretty clear this college student is engrossed in an anatomy lesson involving his favorite part of the human body and his hand.

Seriously, who knew reading lecture notes could be such a turn-on?

First of all, what on earth are you studying that's so damn sexy you couldn't resist the urge to inconspicuously jerk off in front of your fellow classmates?

I mean, don't get me wrong, I understand we all have sexual urges that need to be dealt with from time to time, but why not answer those urges somewhere other than a library?

I mean, seriously, haven't you heard of a bathroom stall or a dorm room?

At this point, I think he would have even been better off finding a random bush on campus to hide behind while he did his business.

Citations: Guy Gets Caught Burping His Worm In The College Library (Dude Comedy)