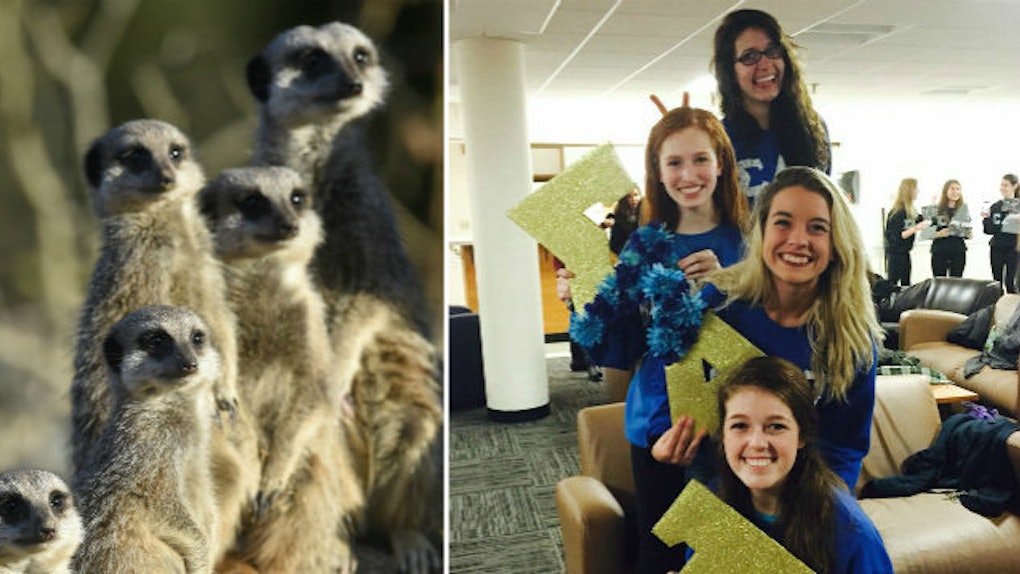 Sorority Girls Pose Like Meerkats And These Pics Are Proof

Ever watch a reality show about sorority girls only to realize you've actually been watching "Meerkat Manor" the whole time?

Well, a like-minded soul with a keen eye noticed the similarities between sorority girls' poses and -- you guess it -- meerkats!

Not seeing the striking resemblance betwixt man and beast in this case?

In the words of Rafiki...

"LOOK HARDER." (These are coincidentally also the words my parents give me every day to motivate me to find a decent bride.)

Take this side-by-side for instance:

It looks like humans and meerkats aren't so different after all. There might be a little Tim in every Timon, if you know what I mean.

Madison Schroder may "hate" herself, but I love the fact she's basically implying her sorority sisters are a bunch of meerkats in trench coats.

Honestly, I don't know where the meerkats end and the sorority sisters begin in these photos.

Can you imagine if all greek life on college campuses were organized after the vast, complex infrastructures of meerkats?

I MEAN, THIS IS SO "RELATABLE."

The mere... (kat) thought of meerkats having their own bigs and littles is making me openly and publicly weep tears of joy.

At least the meerkats didn't hold up weird peace signs, am I right?

Ah, man, the resemblance is just so uncanny. Let's face it, we're all looking for our meerkat pal that we can hug all day and all night.

The verdict is in.

I am ordering a bunch of meerkats on the black market and putting human clothes on them and calling them human names and pretending they are my friends forever.

Regardless, let's give it up for all the meerkats out there who have our backs for all time.