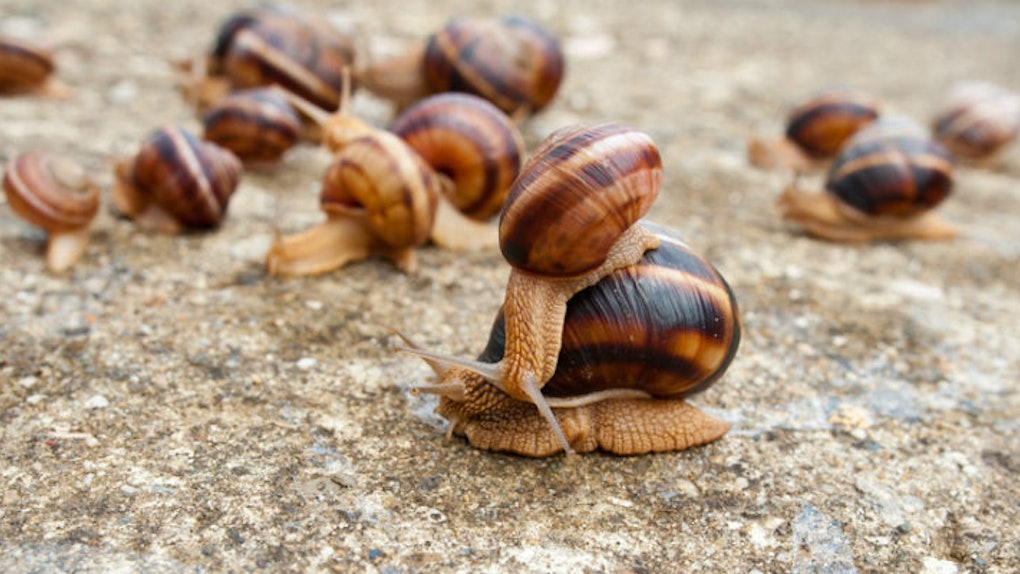 A snail with his genitals in the wrong place has found a mate online.

Meanwhile, I, a person who has her genitals in the correct location, can't get a Tinder date to text me back after they see my horribly grotesque lobster claws for hands.

Jeremey, a mollusk who deserves adoration as much as I do, has found love. So, I guess it's true...

Jeremy, who is a "common garden snail" (but I wouldn't call him that because it is rude) is a "one in a million find."

His shell spirals in an anti-clockwise direction. This means, sadly, his naughty bits are in the wrong place.

He cannot mate with a snail who has a correctly spiraling shell. His life was just as lonely as mine.

Thanks to the internet, Jeremy won't have to die a virgin.

It didn't take long. In fact, it took about a month to get Jeremy laid.

Dr. Angus Davison of the University of Nottingham's School of Life Sciences was the matchmaker. He sent out the plea in October to find Jeremy dat sweet ass hookup.

He didn't do it because he's a bro, though. He did it because he wants Jeremy's children so he can study the genetics of the rare condition.

Not only did Jeremy find one hookup, he found two. What a stud!

One snail is from Suffolk, and another was saved by a restaurant worker who was scrubbing shells in a restaurant in Majorca.

If you're interested in snail sex, it's suuuuuper kinky.

Snails, who are born with both female and male parts (so Jermey isn't really a "him") will produce darts on their body before getting it on.

Then, because they're down with sadomasochistic, they straight up STAB EACH OTHER with the darts. This is their penetration.

Then they fertilize each other's eggs. That's right, they both get the babies!

Maybe that's why it was so hard for Jeremy to find a mate? He's been kink-shamed.

Citations: Jeremy, the snail with his genitals in the wrong place, has found love online (Metro)