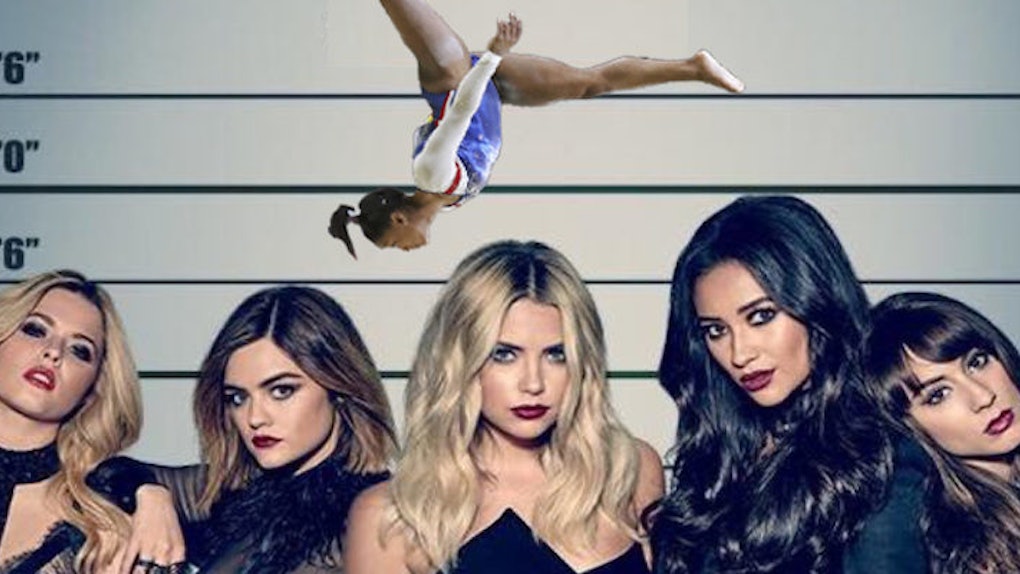 The current greatest gymnast in the world, Simone Biles, will be embarking on a new adventure after she leaves the Rio Olympics.

She'll be heading to the set of "Pretty Little Liars." "PLL" mAstermind I. Marlene King asked Biles -- and the other winning members of the "Final Five" -- to come visit.

Hey Simone, I heard you're a big 'PLL' fan. Well, we are huge fans of yours and everybody there. We're so proud of what you're doing in Rio -- the 'Final Five,' we love it. Come see us as soon as you get home -- and bring your friends!

It looks like Biles will be following in the grand tradition of all-around individual women's gymnastics champions by making a cameo appearance on a fantastic teen television show.

There was that time Shawn Johnson made an awkward appearance playing herself on "The Secret Life of the American Teenager," talking to bad boy Ricky and making oblivious references to her Olympics performances.

And then there was the time Nastia Liukin made a bizarre 15-second appearance on "Gossip Girl" in the episode where (spoiler alert) Bart Bass dies (...the first time).

Much like Johnson before her, Liukin briefly flirts with the bad-guy-with-maybe-a-good-heart before getting shooed off by Blair.

So what wonders will Biles' potential "Pretty Little Liars" appearance bring? Unlike the shows of her predecessors, the "PLL" girls are already out of high school and college, so it won't be a hallway or school dance run-in.

First of all, we have to consider: Who on "PLL" is the bad-guy-with-maybe-a-good-heart? I'm going with Ezra given the whole statutory-rapist thing.

Following that logic, I'm making the prediction now Biles will be a customer at the Rear Window Brew. She'll flirt with Ezra while ordering a latte, and Emily will give her a paranoid side-eye.

Then she'll do a back handspring, back handspring (her beam dismount) right on out of there only to come back in with her signature "Biles" floor exercise pass, with Noel Kahn running in behind her.