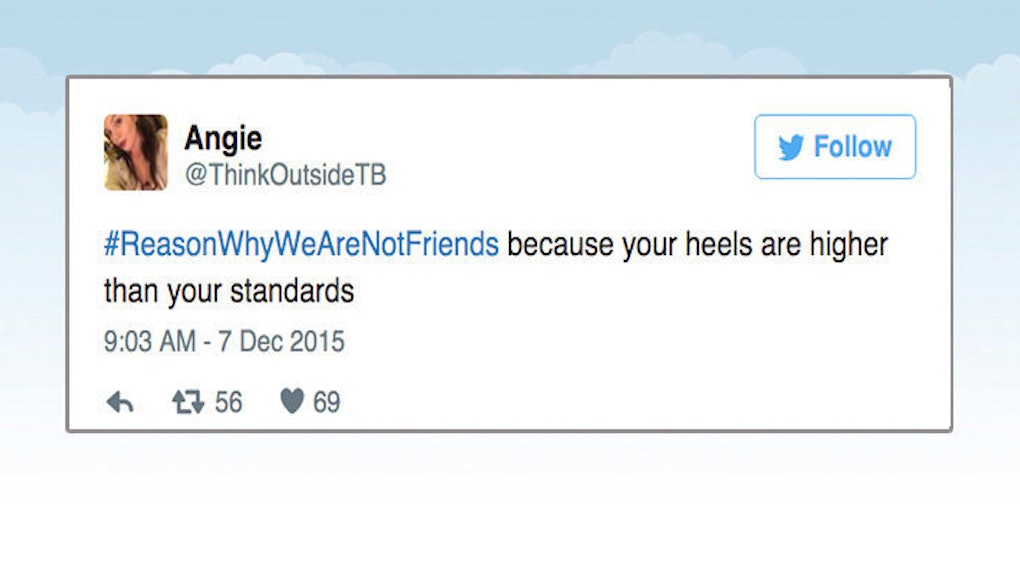 We've all unfriended someone on social media before because of that one little thing he or she does that you absolutely cannot f*ck with.

If so, you're definitely not alone, and the hashtag #ReasonWhyWeAreNotFriends is for your petty ass.

Nobody has time for any bullsh*t these days, and we live in a world where you can shut out the f*ckery with the simple click of a button. Still, these aren't real reasons you should unfriend someone.

If you really don't f*ck with a certain person, just go up to him or her and say it to his or her face. Now that sh*t is therapeutic.

The pronunciation of GIF is one of the most crucial of all.

Damn, how you get so clever?

You've got two faces so I can't decide which one to talk to #ReasonWhyWeAreNotFriends — Ruzaika (@RuzaikaDeen14) December 7, 2015

I'm sure there's a lot of you out there who feel the same.

This could be the deal breaker sometimes.

Somebody keep an eye on this guy.

#ReasonWhyWeAreNotFriends because your heels are higher than your standards — Angie (@ThinkOutsideTB) December 7, 2015

#ReasonWhyWeAreNotFriends You eat pizza with a knife and fork — Daniel Ashley (@DanielAshley13) December 7, 2015

Other people's fries over everything, though.

It's almost as bad as getting your joke stolen in class.

But you keep playin'!

Why can't we all just be like these shark homies?