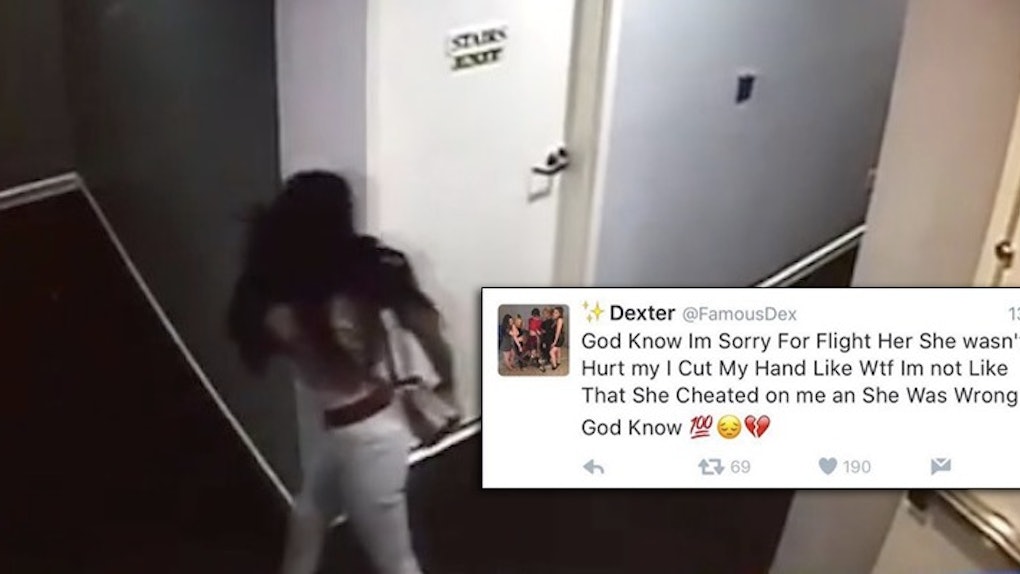 Rapper Tries To Defend Disturbing Video Of Him Assaulting Woman: 'She Cheated'

You never know what goes on behind closed doors -- that is, until it's all caught on camera.

Chicago-based rapper, Famous Dex, tried to defend his shockingly violent actions that were filmed by surveillance and posted on Instagram this Tuesday.

Sorry, Dex. It's going to be impossible to defend this one.

The footage shows him violently assaulting a woman in the corner of an apartment building hallway.

After chasing the girl down the hallway and repeatedly hitting her, a man comes out and breaks the fight up, and guards the female from the crazed rapper until he walks away.

Tish Hyman, a singer, songwriter and rapper from the Bronx, posted the video on her Instagram after Dex spent a rowdy night in her apartment that she was renting to him.

Needless to say, she was pissed -- not only for trashing the apartment, but also for abusing the woman who visited, who is allegedly his girlfriend.

In the fiery caption, she wrote,

Let this man #famousdex @famousdex stay at my place. He not only TRASHED and BROKE INTO my place. He beat this poor girl so badly. Is this is new generation of great artists that young people are looking up to? And is THIS the type of person a great company like @puma #puma chose to represent their brand. So disappoingting. I hope this spreads through the internet and shows these young people what Young Dexter is about. Thank you for hurting me young man. But you truly hurt yourself. #puma #worldstarhiphop #mediatrakeout #300entertainment #theshaderoom #djakademiks

Tish rightfully exposed the rapper's abuse, but Dex quickly tried to defend himself.

Apparently, Dex sent out a tweet basically saying the woman deserved to be beaten because she cheated on him.

Um...when is cheating ever an excuse to physically abuse someone???

NEVER. The answer is never.

Although he deleted the tweets, an Instagram user took a screenshot of the rapper's plea for forgiveness, and it's pretty unsettling.

In the tweet he said, "She was wrong," and, "God knows that the problem is gone now."

After releasing the video, Hyman expressed her disappointment in the rapper through Twitter, saying she is "saddened" by his actions.

If I were Dex, I wouldn't ask Hyman for a place to stay any time soon because the answer is most definitely going to be a no.