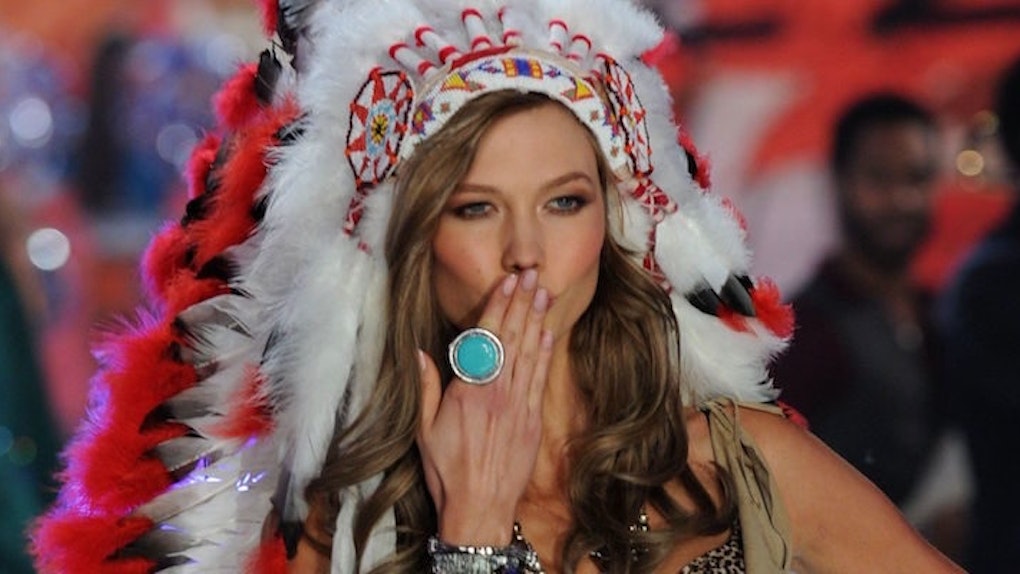 Why Cultural Appropriation Is Still A Problem In The Fashion Industry

We all know of the Kardashian-Jenner clan in some way or another.

If you're familiar with Kendall and Kylie Jenner, you may know they both model.

Kendall Jenner is now a high-fashion model, and she recently walked the 2015 Victoria's Secret fashion show.

But, how did she earn this claim to modeling fame?

She didn't, of course.

The industry headlines are filled with celebrities such as Kendall Jenner, Kylie Jenner and Gigi Hadid, who are known for other things besides their modeling abilities.

Kendall and Kylie are obviously famous for their reality show, while Gigi Hadid has gained publicity for dating pop stars such as Cody Simpson and more recently, Joe Jonas.

While we have models like African-American Jourdan Dunn right beside them in fashion campaigns for top designers like Balmain, she isn't getting as much recognition or as many bookings.

Jourdan Dunn did not walk in the Victoria's Secret fashion show this year because Kendall allegedly replaced her.

The blatant white-washing of runways has been more and more apparent in avant-garde and high fashion shows. Anais Mali, a black model from France, has shared her story about racism in the industry, stating:

[...] I feel like the industry is trying to focus more on diversity, but there’s still a long way to go. In Milan, you don’t really see black girls on the runway; it’s sad. You hear things like, ‘We already have Jourdan [Dunn], one black girl is enough.’ I’m getting good work, I’m happy, but I want to see more black girls.

The one that trended the most on Twitter was Valentino's Africa-themed show at Paris Fashion Week this year. Their show centered around tribal necklaces, cornrows and Kikuyu textiles.

The runway music also included bongo drums. And guess what?

Of the 87 models used, only eight of them were black. Go figure.

The brand has been accused of cultural appropriation on a massive scale. Their runway show for Paris Fashion week was inspired by Africa [...] taking an ‘analogical approach to modern day African grace.'

And in June, Junya Watanabe's African-themed runway show of spring 2016 was held at the Museum of Immigration in Paris.

The show included no black models.

The Twitter community named this collection "The Rachel Dolezal Collection," making "Who wore it better?" comparisons between the white models in dreadlocks and Rachel Dolezal in her distasteful comments.

And what's even worse is the fact fashion critics seemed to actually enjoyed this collection, claiming it was "transporting" and "exotic."

I'm so over the fashion industry capitalizing off black culture/aesthetic without acknowledging the origin and paying dues. How does one have a runway show, showcasing African textiles and silhouettes without including anyone of African descent?

You can check out the photos from the Junya Watanabe and Valentino shows and see for yourself.

At the end of the day, while black culture is popular, black people are not.

This is a post from The Rival at Howard University by Imani Lee.

The Rival is a brand new digital publication that is changing the way college campuses write, read, and think about student news and entertainment. See more at howard.therival.news.