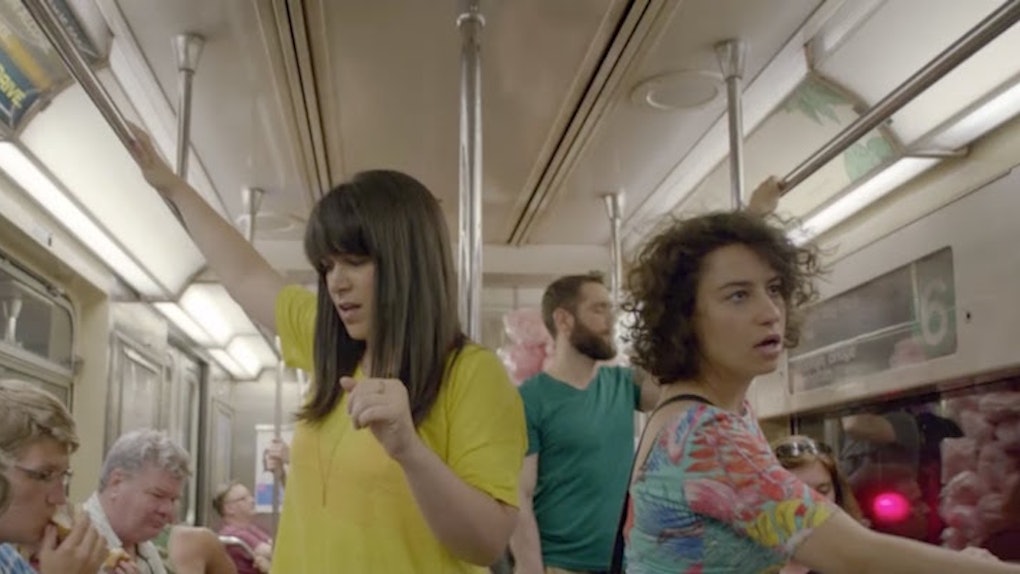 If you've ever taken public transportation even once, you know the anxiety around talking to strangers is too real.

As a New Yorker, the subway is a huge part of my daily life.

Subway time is ME time. I read, craft Instagram descriptions for my food account, manage my to-do list, look at my calendar or just space the fuck out and listen to music. The last thing I want to do on a crowded, oftentimes smelly train, is make small talk with strangers.

And I'm not the only commuter who feels this way. There's an unspoken rule of the subway that ignoring everyone around you is proper form. Everyone knows it, and everyone is cool with it.

But earlier this week, the rules of the subway were completely disrespected by one guy in London. People who take the tube (London's subway system), were in for a rude awakening when little buttons saying "Tube Chat?" started popping up everywhere.

The buttons are apparently thanks to an American man with harmless intentions named Jon Dunne. He's from a small town, and he just wanted to find like-minded people on his tube commute.

Naturally, people freaked out. But silently and passive aggressively on Twitter, of course. Not in person. Because we must avoid actual human contact at all costs.

This tweet accurately represents the collective reaction of Londoners:

Because talking to strangers is exhausting.

I'd rather do this, too. Talking to people on the internet is way less scary than actually talking in person.

OK, a bit dramatic, but we feel you.

I think everyone would happily wear a button that says this:

Some people made their own versions online that more accurately reflect the attitude people have toward "annoyingly chirpy" individuals.

"Cockwallet" is a term I think I'd like to start using more often.

Sure, this guy just wanted to try to do something positive for the community. But frankly, if people wanted to talk on the subway, they would. People appreciate being in the quiet of their own minds before and after being at work for eight hours.

Dunne told Mashable that he thought handing out the buttons "would be way more fun," but instead, "it was sort of brutal."

Despite having a rough time passing out the first 500 at a tube station, he has already ordered another 500 for another go. I doubt the second round will see more success.