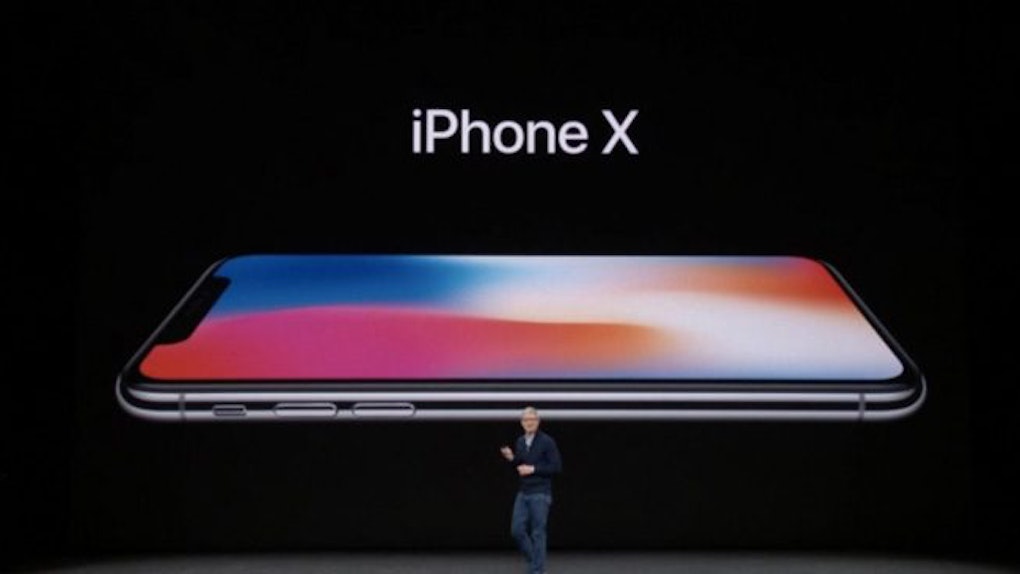 Photos of the iPhone X Are So Futuristic

At Apple's keynote event on Sept. 12, the company announced the arrival of not just the iPhone 8 and 8 Plus, but the phone's luxurious older brother, the iPhone X. And it may just be cooler than the newly announced 8. Why? Well, the X is straight out of a high-tech, near-future crime thriller. And the photos of the iPhone X are here to prove it.

The iPhone X (pronounced "ten," not "ecks") is a beauty, with an edge-to-edge front display, and no home button to be found. It's a clean-looking interface with a large screen -- and a bit of an operative puzzle. With no home button, how are you supposed to unlock your phone or navigate your apps? What are you supposed to anxiously press repeatedly during an awkward date or while waiting for the bus? No problem -- just swipe up instead of pressing a home button. And you can do that all the live-long day: the battery lasts two hours longer than the 7.

From there, you'll have access to the super-high resolution OLED screen with a "super retina display." OLED, according to Business Insider, is a display technology that creates light in every pixel, rather than having a separate backlighting system, which creates a "more vivid, realistic picture." So basically: you'll have a little super-high def television in your back pocket. Crowding around a phone with friends to watch a funny YouTube video will be more enjoyable than ever.

Not only will your viewing pleasure be in HD, your photos will be even better, too.

The back will have dual cameras like the iPhone 8 Plus, but unlike the iPhone 8, both of the X's cameras will have optical image stabilization. Apple stuck with the 12-megapixel camera in the back, but so far, that has served them well. Much like the 8, the X will offer portrait mode and optical zoom -- which is a true zoom, as opposed to digital zoom, which only adjusts the image in the camera itself and leads to a loss in quality. The X will also offer portrait lighting mode, which will make your selfies pop off.

If you're already drooling, it's about to get worse. The X has an all-glass display, and not just because it looks nice, either. The glass back actually allows for wireless charging. Apple's wireless charging port, which will allow you to charge multiple devices, won't be available until next year, but there are plenty of wireless chargers already on the market.

Oh, and I'm sorry for you and your wallet, but it comes in either space gray or silver. Space. Gray.

And as for unlocking, you just let this multinational corporation scan your freaking face with Face ID.

The front-facing camera, seven sensors, an infrared camera, and a dot projector placed along the black band running across the top of the phone create a map. Of your face. The Guardian reported that the first attempt to use Face ID failed, which doesn't necessarily bode well. But it is, according to Apple, the future of unlocking smartphones.

One good thing about Face ID? Animojis. You read that right: animojis. The front-facing sensors will scan your face and create custom emojis based on your facial expressions. You'll have winking pandas and slightly hungover dogs. Your friends will really live what you're living. Apple plans on starting with just a dozen animal animojis and building from there.

Yes, the possibilities seem endless. But does it actually do what it promises?

Engadget did a quick video walk-through with the phone and said, "Getting used to the new version of the interface... is a little weird."

But all in all, the phone operates smoothly during walk-throughs. And with its form-meets-function all-glass display, it looks great.

People seem to be excited about the high-end phone. The X will cost a fair chunk of change: $999 for the 64 GB model. For that price, you'd think they would have given us our headphone jacks, but this model is still headphone jack-free. That said, at least you can wirelessly charge it while plugged into the lightning port.

It's the little things.