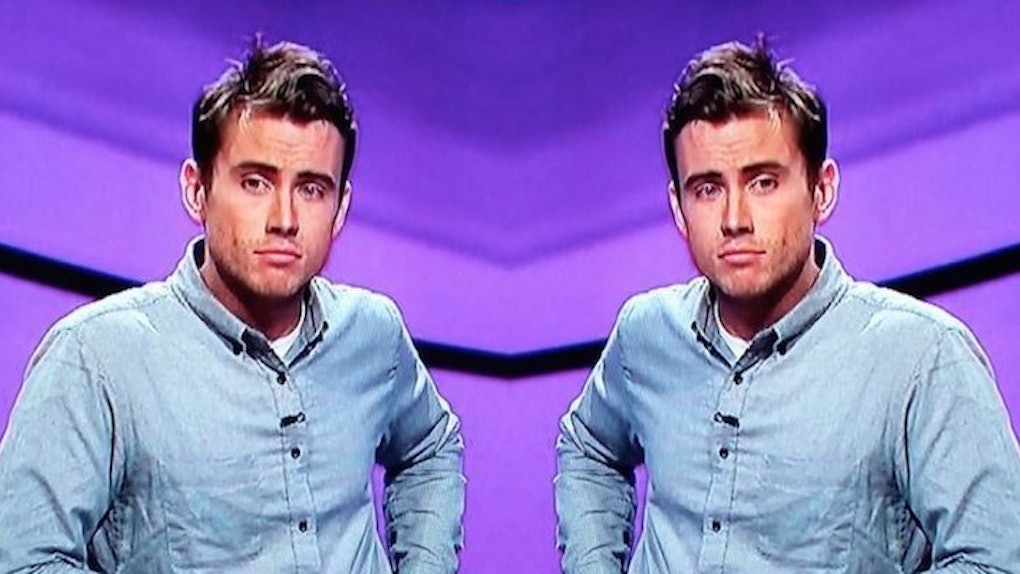 There Was A Really Hot Bartender On 'Jeopardy!' And People Freaked Out

Did you know "Jeopardy!" is still on the air? It is.

And last night, the famed game show hosted an interesting guest whom I will call Hot Guy Tom.

Hot Guy Tom, like many hot guys before him, isn't the sharpest tool in the shed. Though he made it to the final round, he answered the last money-making question with, and I'm quoting here, the word “what.”

However, what Hot Guy Tom lacks in brains, he makes up for in looks.

Twitter was aflutter last night with commentary on Tom, who apparently moonlights as a bartender-slash-wannabe director, with many users praising his model-worthy looks.

Scroll below to see the myriad of reactions to Hot Guy Tom, who is likely the first and last "Jeopardy!" contestant to inspire such excitement.

This is Hot Guy Tom, the latest loser on "Jeopardy!".

He seemed to enjoy staring at his reflection in the monitor…

Exactly how many lines of cocaine do you think Tom did before taping this episode? #jeopardy — Melissa Hagan (@Sassafrass_27) October 26, 2015

...and flaunting his good looks.

Tom was doing pretty well for a while...

And we thought he may be one of the rare few with beauty and brains.

But the game show didn't quite go in the direction he'd planned...

Tom the bartender might be one of my favorite jeopardy contestants of all time. pic.twitter.com/HV925kuXlb — earl simmons (@iamsamkeller) October 26, 2015

...and the aspiring movie director landed his pretty face in last place.

If Tom get one more question wrong I won't be surprised if he has a nervous breakdown and kills himself on tv. #jeopardy — Melissa Hagan (@Sassafrass_27) October 26, 2015

I doubt that's how he envisioned his silver-screen debut.

In the end, HGT did win something...

excuse me tom, are you in the right place? jeopardy contestants are not supposed to be this hot pic.twitter.com/i40tZntRMa — Lauren Weddle (@lauren_weddle) October 26, 2015