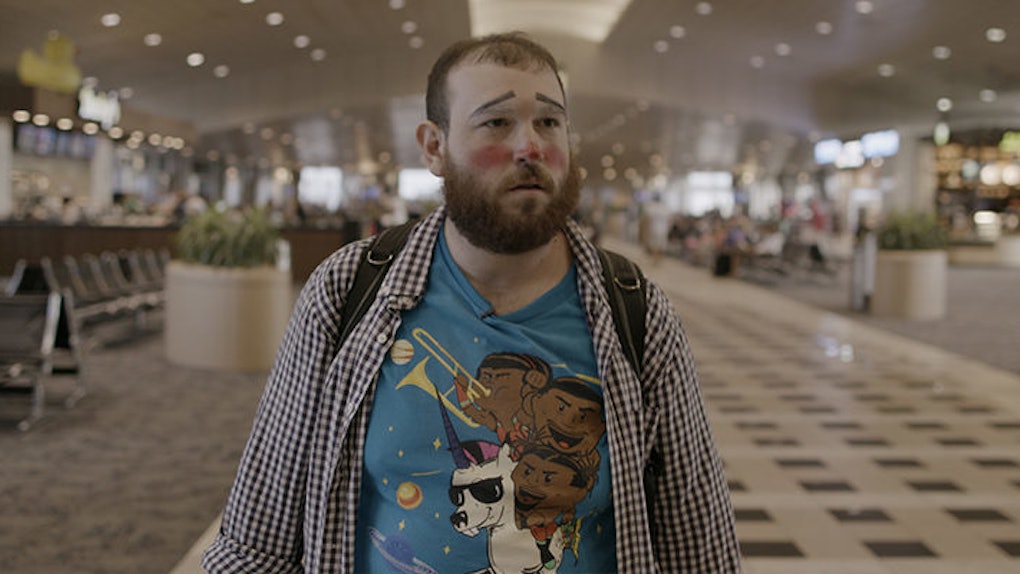 Open Letter To Creepy Clowns, From A Circus Clown: Stop

I think we're all pretty done with this knife-clown bullshit. Cool? Great.

I'm not talking about flax seeds. I'm talking about people dressing up as clowns and scaring people with knives. (Although, flax seeds suck, and one time my mom snuck them into a cake, and I still haven't forgiven her.)

Anyone else notice how this clown stuff is a thing all of a sudden?

There have been cases popping up all over the country of people putting on clown costumes and terrifying normal people just trying to live their lives without being stabbed by fucking Krusty.

AMERICA'S YOUTH HAVE GOT TO FIGURE OUT A NEW HOBBY.

This has become such an issue that the White House decided to address it a little bit during their morning news conference -- I think that's what it was.

I base everything I know about the White House off of “Designated Survivor.”

Call me old fashion, but I like my clowns like I like my nerdy modern Catholics: genuinely enthusiastic about science while being amazed at the wonderment of our lord.

Aside from how this will no doubt lead to some moron kid in New Jersey -- JERSEY PRIDE -- getting shot in the face because he decided to sneak up on a dude with a shot gun while wearing a Bobo mask, the worst part of this is that it's ruining clowns for other people.

They've completely ruined all that positive will us clowns have made in the world community.

Oh, by the way, I say "us clowns" because I once was a clown for a day a few months ago.

Does this make me an official clown? No.

Is this the Ringling Bros. equivalent of claiming I am well versed in Chinese culture because I once had Korean barbecue? Yes.

Will that stop me from speaking up on this growing epidemic like an expert on behalf of the entire clown community? Absolutely not.

I get that clowns being murderers is a common movie trope. I admittedly hate horror movies, but appreciate the genre because I know a lot of people love these kinds of films.

You can choose to watch those movies though. You can decide to view clowns as sadistic chainsaw killers if that's what you really want.

You could also decide to view them as cute goofballs who love getting pied in the face and to juggle stuff. It was really up to you how you wanted to consume your clown content.

That choice is now non-existent thanks to a bunch of dweebs with Halloween store credit and access to a Cutco catalogue.

Dudes, you are preventing children, and adults quite frankly, from making this decision on their own, and that's just a miserable thing to do.

Nobody wants this! Nobody is OK with you guys going out and being massive dicks. Clown-knifing is trending lower than the Trump term "grab them by the pussy" and the concept of being covered in bees COMBINED.

We, and by we I mean society, aren't even asking you to stop being creepy woods clowns. We love that you have a hobby!

You're clearly out and taking up an interest in mask-making and creative storytelling, both amazing things that may lead to employment one day.

We're just asking you to do it in a way that won't make us think we're about to be murdered.

Let us come to you to see your work, don't just shove it at us without our knowledge. Work at a haunted house or intern for some set designer or make a terrifying movie.

Just let us have the ability to watch it.

What you are doing is the equivalent of a five-star chef making a delicious bowl of soup then chucking it in some random guy's face and yelling "HOW DO YOU LIKE THIS SOUP I MADE?!?!"

Until you do, I have every right to laugh loudly when stuff like this happens: