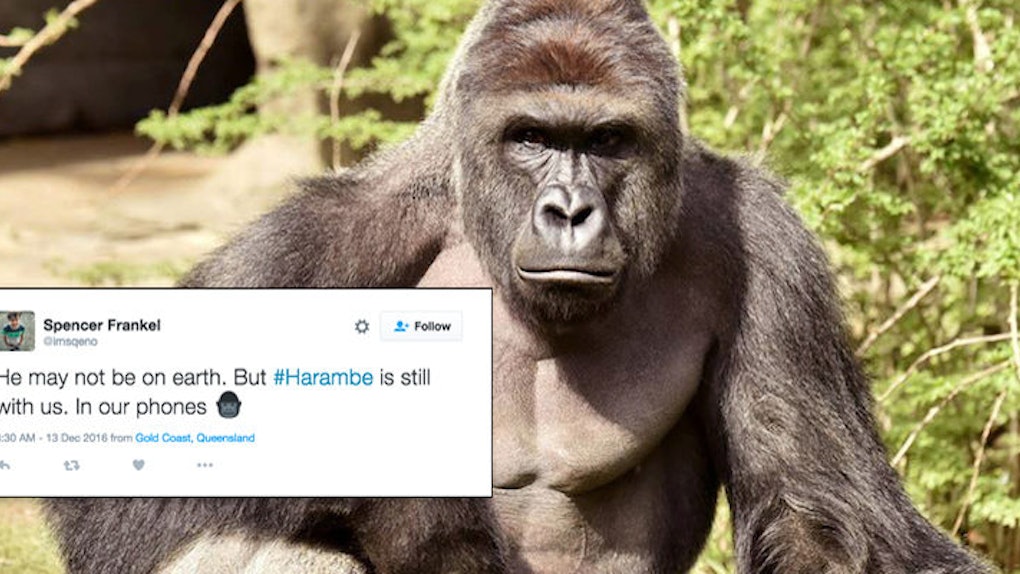 Twitter Thinks The Gorilla Emoji In The New iOS Is Harambe

Apple just released a gorilla emoji on the latest version of iOS, and it seems everyone on Twitter has drawn the same brilliant conclusion: The new gorilla emoji is Harambe.

As Bro Bible points out, the latest Apple iOS update is full of new additions, such a new videos widget and a TV app, but the greatest addition is undoubtedly everyone's favorite gorilla.

Harambe was shot and killed because of bad parenting, but thanks to Apple, he has been reborn as an emoji!

In total, Apple has added 104 new emojis to iOS 10.2, but there's only one that has everyone on Twitter losing their collective sh*t.

I can't stress enough how huge this is.

Just think about it for a second.

Just imagining all the different ways I'm going to use the Harambe emoji — I won't lie, a lot of the time, it won't even makes sense — puts the widest smile on my face.

I don't know about you, but I've already seen way too many Harambe-themed ugly Christmas sweaters this season, and an emoji is clearly a better alternative.

We all love and miss Harambe, but we don't need to see your terrible fashion choice thrown in our faces.

In any event, back to the Harambe emoji, because that's what this day, Tuesday, December 13, is really about. Christmas isn't for another two weeks or so, but I think we can all agree we got an early present.

As you can see, folks on Twitter have basically turned today into a national holiday. Yes, it's Harambe Emoji Day, and everyone seriously needs to stop what they're doing and shout it from the rooftops.

This feels like when WWII came to an end, you know what I mean?

I can't wait to send my first text using the Harambe emoji — it may or may not contain any actual words.