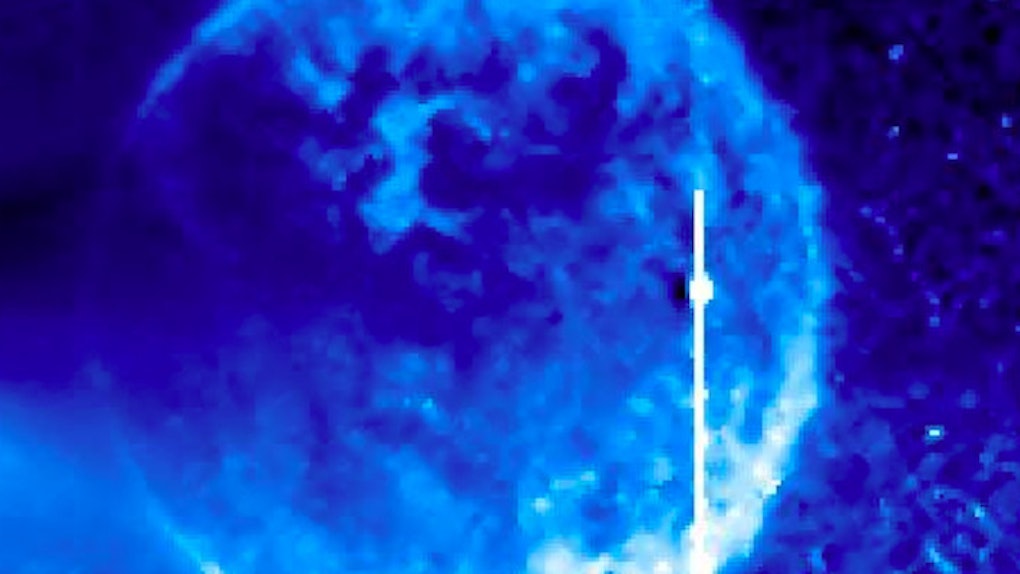 PROOF OF ALIEN LIFEFORMS?! We hope so, because winter feels like it's here now, and there's really not a lot to do.

So let's welcome this distraction from reality, brought to us by UFO hunter Pamela Johnson.

She spotted a weird blue object floating around in front of the Sun via NASA's SECCHI STEREO HI1 satellite.

This huge object is captured on NASA'S SECCHI STEREO HI1 satellite today. Our Sun is casting the Light that is coming in from the left side of the frame. This satellite's archives showed the Sun began reacting to this object on November 15th and there are several frames missing on the 15th and 16th. Wow! Front and Center. I have added an image from November 11th showing only solar wind and passing planets so you can see what a normal view looks like.

One of the lastest GaiaPortal posts comes to mind, "Astro-glances compel the masses to action." I have just consulted my Divining Rods and they indicate this is one of the Blue Spheres and not to fear.

Well thank god for that — I was just about to sell all my goods and go on a round-the-world trip to enjoy the limited time I had on this planet before little green men come at me with a probe.

The stills found their way on to YouTube where people are having a good time guessing what the mystery object could be.

Someone suggested it could be a rouge planet. Another said NASA would never be so careless as to release photos of alien lifeforms into the public domain. I hear that.

Whatever happened to a good old unsolvable mystery? Let's all be happy with the assumption this is just a weird blue object... SENT FROM ANOTHER PLANET TO DESTROY EARTH.