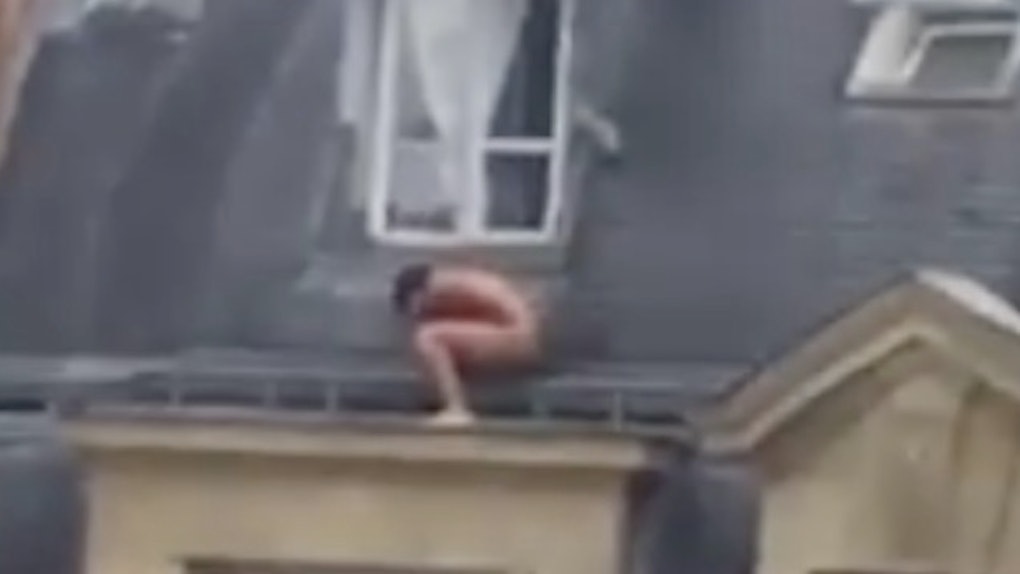 Well, it looks like someone's either playing an intense game of nude hide-and-seek or trying to avoid the wrath of his lover's husband.

I'm going to assume the latter.

A man living in France looked out his window on Wednesday and saw a man hiding underneath a window on the ledge of an apartment building -- and he was butt-naked.

Naturally, he whipped out his phone, took a Snapchat and posted the cringeworthy footage on Facebook.

What are you hiding from, buddy?

In the footage, captioned "But I live where?" in French, a nude man can be seen squatting below a window on the ledge of a (very high) apartment building.

We aren't sure exactly where the video was taken or what happened after the clip ended, but the internet is jumping to its own conclusions about what he was hiding from.

Really, this looks like it could be a scene from a Hollywood movie.

I can see it now: The husband unexpectedly walks into the apartment while his wife is hooking up with another dude. Her lover gets nervous and jumps out the window to avoid confrontation.

Am I right?! Where are the cameras?!

Obviously, the only camera at the scene was the camera on Naphtal's phone, and the only critics are the Facebook users commenting on the video.

It seems like most people agree with my assumption, though (excuse the awkward Google translations).

"You risk your life for the wife of someone!!! It's a dead very stupid huh."

"That's why you shouldn't be the lover of a girl as a couple lol."

"When you stop to go see your married neighbor!!!?"

Her husband is going to find out sooner or later.

Facebook user Shanona Rese pointed out the woman's husband is sure to see the viral video.

I know one thing's for sure: I definitely wouldn't want to be around if the assumptions are true and he did realize the naked man was hiding outside his window.

Citations: Why could that naked man be hiding outside on the roof? Read more: http://metro.co.uk/2017/03/16/naked-lover-filmed-squatting-on-the-roof-after-jumping-out-window-6514451/#ixzz4baq3xFqi (Metro)