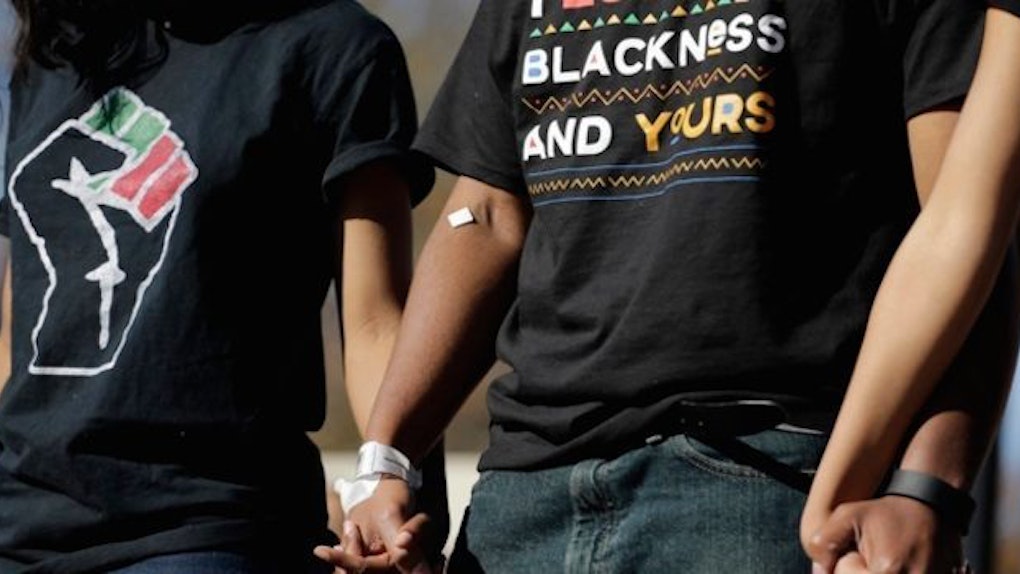 The Progression Of Tensions In Mizzou, As Told By An Alumna

During breakfast, almost all of us became distracted with a flood of text messages and updates from Facebook and Twitter with the news someone had thrown large amounts of cotton outside of the Black Culture Center the night before.

This insinuated a cotton field and the horrific slavery era in America, an era that many "famed" Mizzou alumni were a part of.

The act, which took place during my sophomore year at Mizzou, left me and many of my peers speechless.

The response in the following weeks included a town hall meeting, a unity campaign and two students receiving community service as punishment for "littering."

All efforts to make a change quickly faded away.

One year later, the "n" word was spray painted on a statue outside of a residence hall.

It was like déjà vu, but we knew more had to be done than the year before.

However, I slowly began to check out mentally.

This wasn't anything new, and I knew it would take more than a catchy campaign to end institutionalized racism, though I wasn't sure how to take that step.

From Lloyd Gaines' rejection from the School of Law (who Gaines/Oldham Black Culture Center is named after), to recently, MSA President Payton Head being called the "n" word while walking downtown, incidents of blatant racism and hate crimes at the University of Missouri have been too many to count.

I remember numerous accounts of hateful acts that took place at the beginning of my freshman year when then-Senator Barack Obama was running for his first term as president.

It all came to a breaking point when grad student, Jonathan Butler, began a hunger strike until President Wolfe of the University of Missouri system resigned or was removed, due to his lack of leadership and concern in dealing with racial injustices effectively.

Many current students, alumni and faculty showed support via social media, letters of support and petitions.

Thirty-two players from the University of Missouri football team stated they would not participate in any football-related activities until President Wolfe was removed and Jonathan begins eating again.

After the football teams’ strike, former President Wolfe released another statement, saying he would be resigning.

I think it's a shame that it would take support from the biggest source of revenue for Mizzou, athletics, to get a response.

You would think a student putting his or her health at risk for justice and quite would gain the proper response.

Unfortunately, as Kim English stated via Twitter, unless you are an athlete you are not openly welcomed or respected as a black student at Mizzou.

There have been many attempts in the past to change the culture of hate at Mizzou through campaigns, mandatory diversity training, numerous and events, but to no avail.

I've been encouraged, however, by the bravery, courage and demand of current students to let their voices be heard and change to take place by any means necessary.

It is distasteful for a school system to be headed by a president who does not believe in systemic racism, or blames instances of racism on students of color.

It is distasteful for any university to take accusations of plagiarism more seriously than any act that emotionally or physically threatens the well-being of its students.

However, the efforts of these students have finally paid off and Wolfe has resigned.

Wolfe had not shown much regard to create an atmosphere of  inclusion, safety and zero tolerance.

How could students and faculty been held accountable for hate crimes, under a president who was not taking such offenses seriously?

Changed attitudes about systematic oppression begin from the top, down.

Former president Wolfe did not stand beside marginalized students and take the necessary steps to improve the campus atmosphere at Mizzou.

Through PR statements that beat around the bush about yet another diversity initiative, driving away protesters from the Homecoming Parade and being caught on video stating an ignorant belief of what systematic oppression is, it was clear Wolfe needed to resign.

So, to my fellow Mizzou Tigers standing up for justice, congratulations.

I stand with you in solidarity, for this is only the beginning.