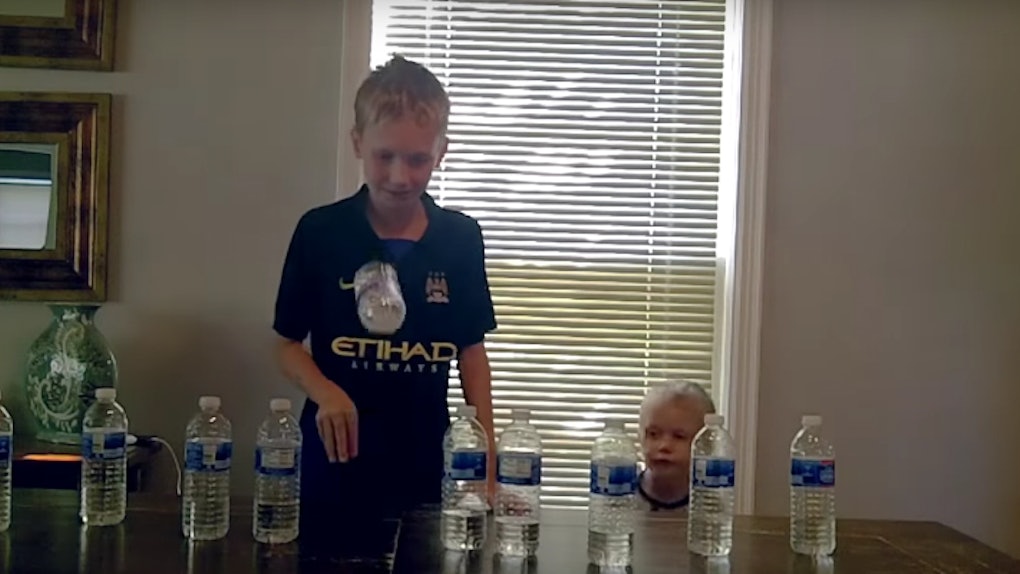 What was cool when you were in middle school?

I wish I could answer this question, but I was very, very uncool when I was in middle school myself.

In fact, the only reason I have social media is to try to prove to the people I went to middle school that I am cool now.

That said, I do have a number of former high school chums who are now teachers (very scary, I know, as I remember how they were in school). And for some reason, all of the ones who work in middle schools are complaining about the same thing.

This year it isn't how terrible the students smell from not realizing they've entered puberty and having BO. Now...

It's the Water Bottle Flip.

Kids will try to flip a half-filled water bottle to land it upright, or upside down.

Imagine how deafening the echoes of water bottles being tossed from the cafeteria of your middle school are upon the ears of those poor teachers...

Flipping has become an obsession for middle schoolers and possibly something else to focus on besides their confusing new feelings toward the opposite (or same, in some cases) gender.

In fact, the Boston Globe reports that it is some type of epidemic.

One mother, Alyssa Lefrancois (fancy last name) of East Taunton said her four children attempt to flip a bottle into a cup-holder in her car. She even discusses how quickly this addiction has spread...

My son went to the Little League World Series, and they were teaching the kids from Japan how to do it.

My God... it's positively airborne...

Innocent Senatore found himself without a talent for the talent show. So, he took to stage with a hobby he and his classmates perfected about a year earlier.

Then, the video spread like a wildfire in the dry, dry country side of California.

One parent, Jennifer Barry of Foxborough, explained her own child's wasteful obsession, saying,

The other day, [my son] got a brand new Poland Spring bottle and poured half of it down the drain. I was like, 'Noooo!'

Imagine the constant thumping of your middle schooler trying to perfect his or her water bottle flip.

A lot of the popular trends right now my dad thinks are kind of stupid. But he doesn't really know what they mean, and he didn't really live them, because [he's from] the '80s.

Still, as annoying as this hobby sounds, it's probably better than what I spent my middle school years doing: binge-drinking Red Bull while trying to dress like Avril Lavigne.