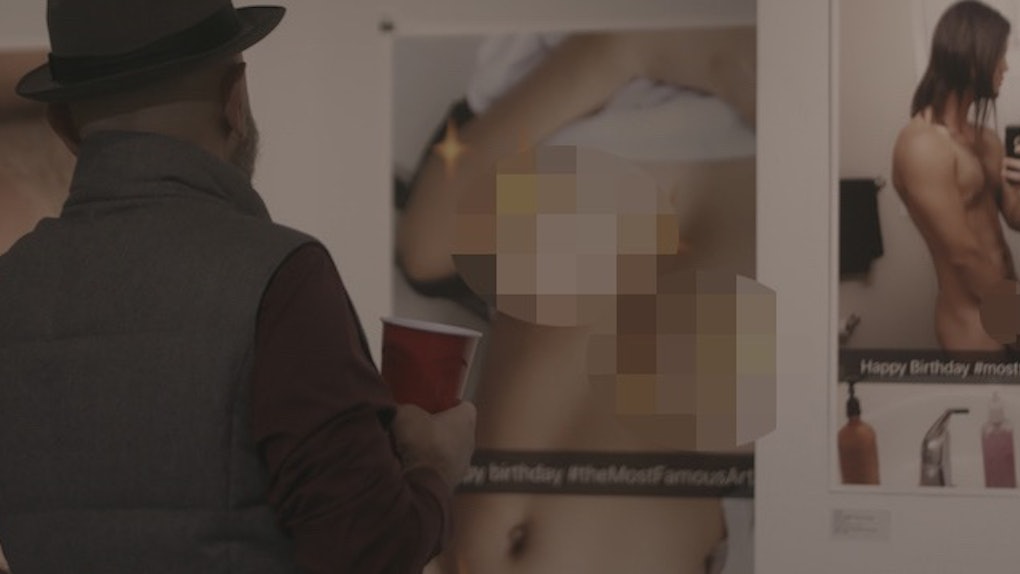 Artist Screenshots Nude Snapchats And Sells Them In NYC

I bet you never thought sexy nude Snapchats could be turned into pricey pieces of art, did you?

Let's just say he doesn't leave much to the imagination.

Matty, who goes by the name "The Most Famous Artist," screenshotted the nudes, printed them out and hung them along the walls of his art gallery for the public to see.

He claims his motive was to create an exhibit showcasing the screenshots in an artistic way that reflects today's society.

Matty Mo started his Snapchat experiment in July 2016 when he asked his followers to send him "nudies" while he was bored.

He talked to Elite Daily about the beginning stages, saying,

When I first started receiving these messages, it was just a joke. When I started this project, like most of my projects (the 'Kanye West' project, the 'Cash Brick' project),  it's just an experiment. And the ones that the public sees are experiments that work.

Quite obviously, the experiment worked, and he moved forward with the "Happy Birthday" project.

Commenting on the process, he stated,

July of last year: It's my birthday, I'm bored, I said 'send me some nudes.' And because my following's growing, I got way more nudes than I was expecting. It was a way broader variety. It was all shapes and sizes and colors and ethnicities and vulgarity -- and so, I started to push the project forward.

The Most Famous Artist justified calling the nude Snapchats "art" by claiming the work he creates is inspired by his life on the internet.

What I've learned over the years is that artists that are remembered during different eras use the tools of their times to tell the stories of their times. And so, the internet is the tool of our time -- and more specifically, Snapchat is a tool of our time.  So I wanted to explore what it is that goes on Snapchat and figure out how to make an art project out of it.

When his phone became flooded with nudes, Matty started his collection and set boundaries for his followers.

As a preface to the submissions, he told everyone they must be 18 or older, and they couldn't include their face or any identifiable feature in the pictures, such as a tattoo.

Matty also told his followers to add the message, "Happy Birthday #TheMostFamousArtist" to the snaps so he knew who wanted to be included in the project.

Throughout the duration of the experiment, Matty received 500 images, and about 400 of those broke his rules.

Still, he claimed most of the submissions were "picturesque" and looked like they were taken by a professional photographer (it's true -- take a look for yourself).

Not all of the images were "artistic," though. In fact, Matty talked to us about how his experiment became frightening at one point.

It was then Matty contemplated the legality of what he was trying to accomplish.

He wanted to make sure he could "make a statement, and do something that pushes boundaries" without toeing the line of what's appropriate.

Well... Matty isn't really sure if what he's doing is legal or not, and his work is bound to stir up some controversy in the art world.

However, he made legitimate points that suggest what he's doing could be legal, pointing out the fact that Snapchat went public the same week his exhibit opened.

Snapchat just went public, and the public markets embrace the platform. So, Snapchat is effectively making money off peoples' nudes. If I do the same exact thing, how is that different?

The Most Famous Artist is selling the pieces on his website (and at the showcase) for prices that range from $200 - $1,800.

He argues purchasing a screenshot will be like "buying a stock option" in his brand.

On top of the legality issues, Matty faced ridicule while setting up the exhibit inside his gallery.

Apparently, landlords of the TriBeCa building were bothered when they saw the graphic content, so TMFA needed to adjust his photos so he wouldn't completely disrupt the neighborhood.

As a result of the explicit photos, he's received an array of different reactions.

Some people turn their heads, while others are intrigued.

However, Matty ultimately hopes people who visit will think about the truth behind the "privacy" of the Snapchats they send.

The Most Famous Artist continued,

Maybe people will realize sending a nude on Snapchat doesn't mean it goes away forever.

Matty Mo realizes the risk behind his nude display and hopes New York doesn't shut the exhibit down before it's over.

Even if they do, he's happy he was able to host the opening night of "Happy Birthday," which took place on Friday, March 3.

On Friday, he told Elite Daily,

As long as I get to have my opening tonight, and capture images of it and share this work, I feel like my work is done.

If you're intrigued, come to New York City and head to 60 Hudson Street for a wild night.

The gallery will be open until March 14.

*Elite Daily reached out to Snapchat and they chose not to comment on the exhibit.