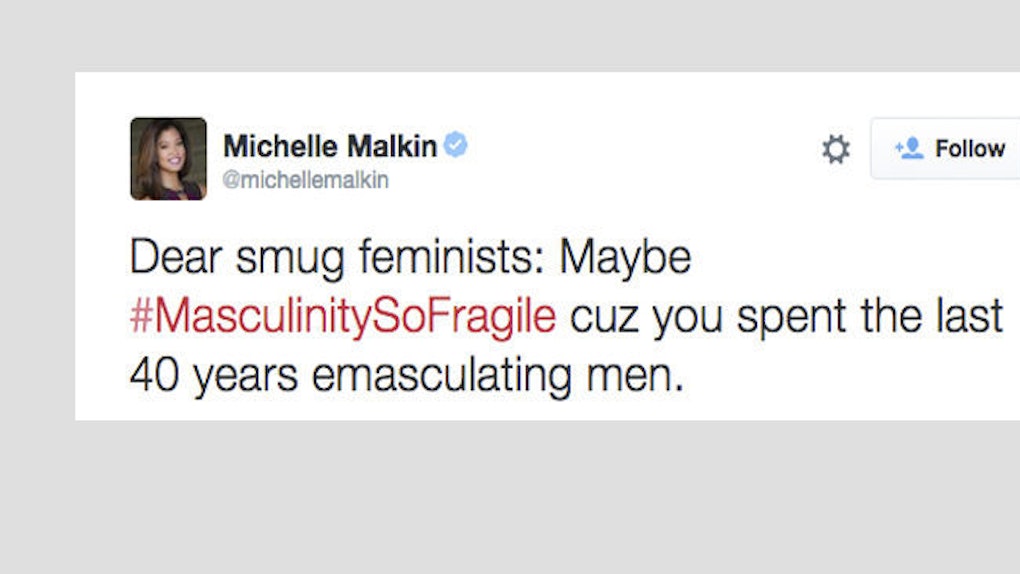 Everything That Went Wrong During The #MasculinitySoFragile Movement

There is a new hashtag floating around the Internet called #MasculinitySoFragile.

Anyone who knows me is aware I'm not the embodiment of a "manly man." But, I'm progressive enough to understand being "manly" is relative.

I'm pretty tired of uber progressives trying to emasculate men and convince us all we should feel bad about filling whatever role we believe meets our individual level of "manliness." I'm also over seeing commercials that depict men as knuckle-dragging dolts, who would be left to eat ramen noodles out of a dog bowl with a spatula, if we weren't lucky enough to accidentally stumble into a marriage, in which we are saved from ourselves.

This doesn't mean I want to see men exclusively saving damsels from the doldrums of their placid existence, either.

I'm not apologizing for being a man just because there are guys out there who are total dipsh*ts and don't treat women (or anyone who isn't a straight white male) with respect. It's important for men to be wary of other men's shortcomings and strive to set better standards.

I believe men today do not behave enough like the men our previous generations represented.

Understanding women are equal to men does not devolve our masculinity. It retains whatever level of masculinity you're comfortable with, all while being a kind, intelligent, respectful and accepting man.

#MasculinitySoFragile is aggressive. Being assertive is different from being aggressive.

Being aggressive is anti-intuitive when you're trying to teach men being physically strong has nothing to do with masculinity. The problem with the hashtag is many of the accompanying examples are irrelevant to the fragility of a man's masculinity.

For every great point made, there are innocuous points made:

#MasculinitySoFragile Guys have to say "no homo" when showing affection to another guy, which is like saying "no Oedipus" when u hug ur mom. — Brandon Evers (@BrandonEvrs) September 23, 2015

#MasculinitySoFragile that your entire sense of self is compromised by the new female Ghostbusters. — Laurie Penny (@PennyRed) September 23, 2015

But here's the kicker: A man's masculinity is fragile. It's why we need strong, intelligent women to guide us to a place where we become better versions of ourselves. We don't need them attacking us and trying to drive all the masculinity out of us.

To the misguided angle of the hashtag, Michelle Malkin had this to say:

To be fair, I don't think singling out feminists is exactly helpful, either. That's also pretty aggressive.

Feminism is a movement I fully support. But her point is my point. It has become shameful to be a man in our society.

Now, we don't help the narrative by having a bunch of ignorant, oppressive "He-Man Women-Haters" in positions of power, but that doesn't mean every average male falls into that cycle.

I'm not threatened by a hashtag or its intended message. But some men are, and I realize this only bolsters the validity of the hashtag. What worries me is further alienating men who have fragile egos, and widening the gulf between immovable pride and fluid understanding.

As men, and as a society, we need women to strengthen allegiances and educate. We don't need them to create a hashtag that tells us everything that's wrong with us.

It has been said "destruction is a form of creation." Tearing down the traditional monuments of masculinity (and the men who represent it) can be an effective first step toward creating a new ideal.

But, this is only possible if there's a plan of action for what to build in its place.

There is no reason to be threatened by masculinity. I realize I'm saying this as a man who has never experienced the daily fears women have, but masculinity is not exclusive to misogynistic meatheads.

In fact, being masculine and being a man are not mutually exclusive.

It's not okay to be a man and use that sole fact as the genesis of your masculinity. You earn masculinity, just as you earn respect.

You have neither when you act like an assh*le to others.