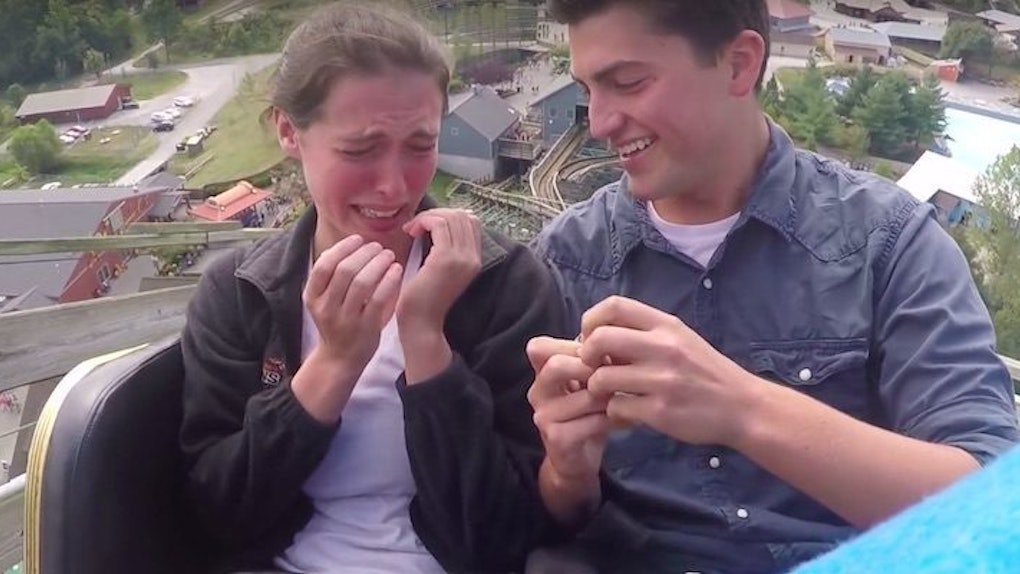 Allison Boyle assumed she was going on a boring roller coaster ride full of average, run-of-the-mill screaming and panicked laughter.

In a video taken by a friend, the pair sat in the back of The Voyage coaster, and Crecelius launched into a roller coaster-themed proposal speech. He said,

At one point in time you had mentioned to me that life is like a roller coaster. It's got its up and downs, it's got twists and turns, and it even throws you for a loop sometimes... You can go by yourself, but it's a lot more fun to go with another person. So I wanted to ask you if you want to be my roller coaster buddy. Allie, will you marry me?

THE JOKE IS ON YOU, ALLIE. BET YOU DIDN'T SEE THAT COMING.

She agreed and spent the rest of her ride weeping, her tears instantly wiped from her face by the romantic science of g-force technology.

As the coaster rolled up to the spot where the ever-flattering mid-ride photo gets snapped, Crecelius unbuttoned his shirt to reveal a tee that read,

A LITTLE PRESUMPTUOUS OF YOU THERE, AUSTIN.

Once the pair made it back onto solid ground, Crecelius got down on one knee and did the damn thing old school with a diamond ring.

Citations: Surprise Roller Coaster Proposal Is One of the Most Thrilling of All Time (Cosmopolitan)