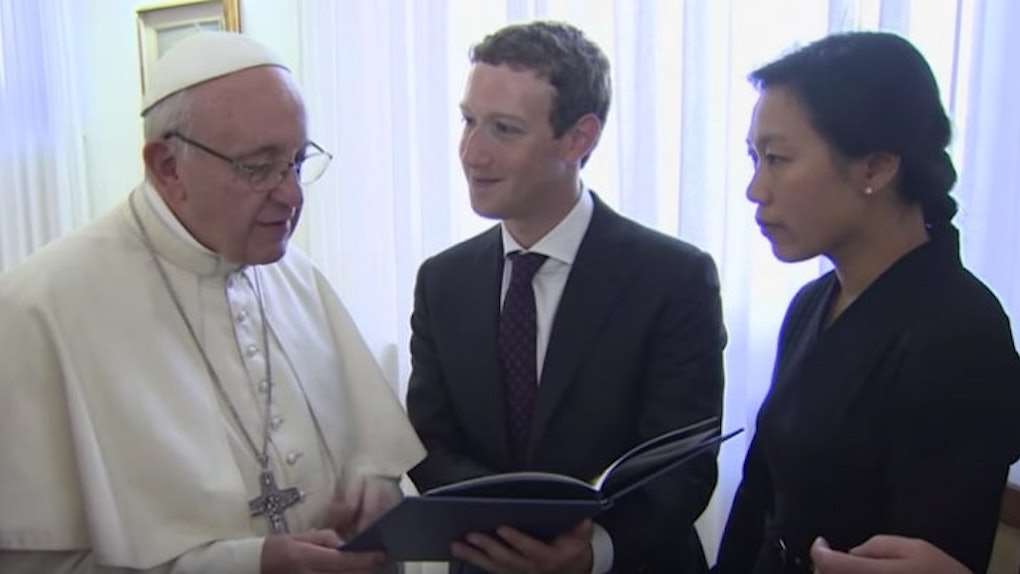 Facebook's Mark Zuckerberg, alongside his wife Priscilla Chan, met with Pope Francis on Monday and gave him exactly what you would expect from a tech CEO: a drone.

Zuckerberg said of the occasion,

It was a meeting we'll never forget. You can feel [the Pope's] warmth and kindness, and how deeply he cares about helping people.

Zuckerberg posted on his Facebook feed a picture of himself presenting the Pope with a model of Aquila, a solar-powered aircraft. Facebook hopes Aquila will help to expand Internet access in developing countries.

In a statement, the Vatican Press Office said,

Together they spoke about how to use communications technology to alleviate poverty, encourage a culture of encounter and to communicate a message of hope, especially to the most disadvantaged.

Zuckerberg, who honeymooned in Rome with Chan and was a student of Latin and classical history, announced his trip to Italy following the country's devastating earthquake.

He will be holding a live question and answer session later on Monday.

Earlier, Zuckerberg uploaded a photo of himself running by the Colosseum.

It's great to be back in Rome! We started the day with a run past the Circus Maximus and House of Augustus up to the Colosseum. It's pretty amazing to run on roads in the city that helped invent them.

Facebook continues to become more and more of an influence when it comes to covering international disasters.

Alongside Facebook's Safety Check feature, which lets friends and family know that their loved ones are safe after national disasters, bombings or shootings, the trending news is a constant source of updates.

That said, what do you think the Pope is going to use his drone for?