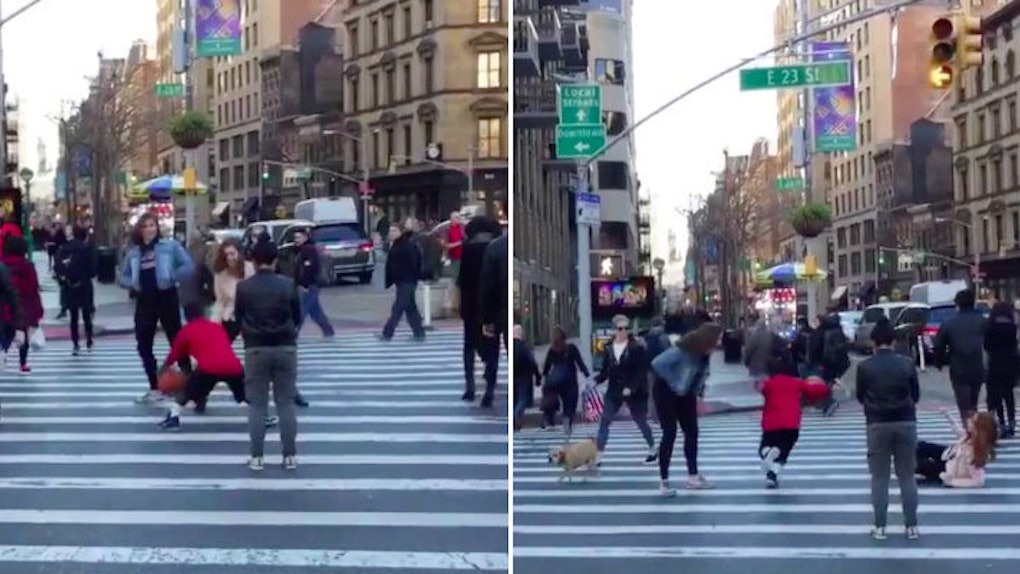 This Man Destroyed A Teen's Ankles With His Dribbling Skills

However, the person he most devastated with his skills was 15-year-old Gillian Jordan, who took a glorious tumble in the middle of a crosswalk trying to defend Jahmani.

His approach starts off innocently enough. And the person you see in the middle of the crosswalk? That's a guy from Whistle Sports recording it all.

Of course, this is when Gillian starts her defense while onlookers wait to see who will prevail in this basketball battle.

AND DOWN GOES FRAZIER.

All this screenshot needs is a cloud of smoke, and it's a real-life Roadrunner cartoon. MEEP MEEP!

Of course, Gillian was a great sport about it all.

In fact, she told Teen Vogue that she saw Jahmani cross other people up and wanted a chance to try defending him herself,

We were in Madison Square Park eating pizza from a market called Eataly when we saw Jahmani Swanson dribbling and crossing people up. A man [with Whistle Sports] was recording it. My cousins and I approached him, and he asked if we wanted to be in a video. They told us to go on the other side of 23rd Street and go on the cross walk. Jahmani came up to me and crossed me up. I was trying to defend him and I accidentally slipped onto the street.

How did she handle her fall to the asphalt and going viral as a result? Gillian answered,

I think this whole thing is really cool and I'd never expect it to happen to me. It's quite awesome, and I'm glad everyone finds it funny. My mom was on Facebook this morning and saw the video posted, and it had over 2 million views! But Jahmani, the guy who broke my ankles, was really nice about it.

You can watch Jahmani school other people with his dribbling below: