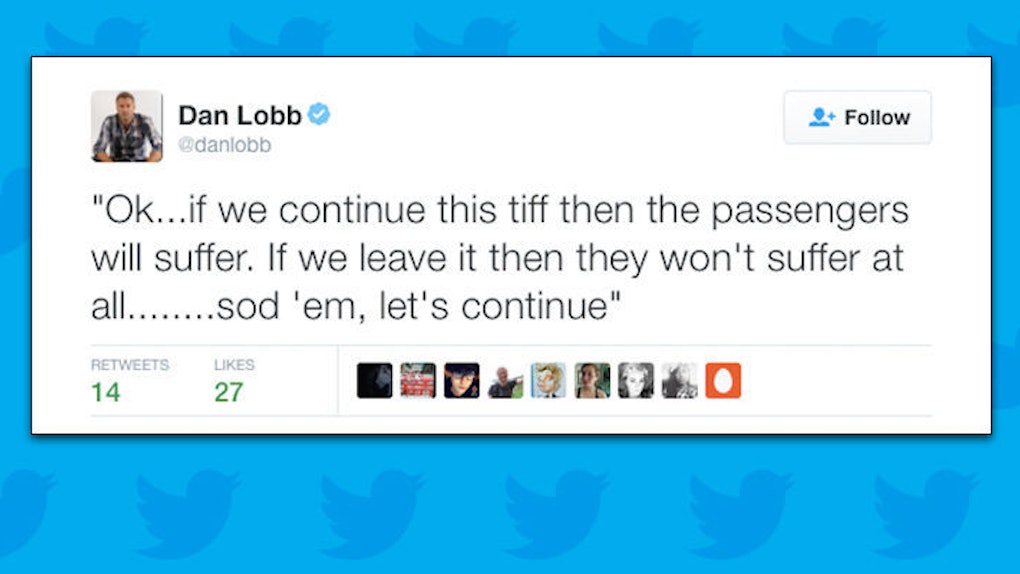 Talk about a fight-or-flight response.

Usually, flight delays happen because of surly weather, not because two of the employees have a surly relationship to each other.

Passengers aboard an easyJet flight destined for Belfast were delayed for over an hour because two of the plane's crew members straight up just did not get along.

Thankfully for us, British TV presenter Dan Lobb was on the scene at the London Gatwick Airport's tarmac.

A passenger on the flight, Dan managed to live-tweet the experience, and from what he wrote, it sounds equal parts hilarious and disconcerting for anyone soon to embark on their own flight (cough, me, cough).

That's right, not one but two crew members were ejected from the flight. And you thought your ongoing passive-aggressive back-and-forth with your co-worker was bad.

We all know that sometimes water is more precious than gold, but it shouldn't be the cause for your HR department to settle a dispute.

And finally, easyJet broke their silence on the matter.

I'd like to think that the solitary "T" at the end of the tweet was actually the beginning of a sentence that was stopped due to a spat inside easyJet's social media team.

Eventually, easyJet reached out to CNN with a statement, saying,

easyJet can confirm that flight EZY835 from London Gatwick to Belfast returned to stand to replace two crew members following a verbal disagreement between them. The safety and welfare of our passengers and crew is easyJet's highest priority and in order to deliver this easyJet's cabin crew need to be able to work as a team. We would like to apologise for any inconvenience caused by the resulting delay. The flight has now continued to Belfast.

I hope those two crew members had enough of a time out to cool down. I think their greatest punishment is missing out on seeing the band Disclosure, who was reportedly on the flight.