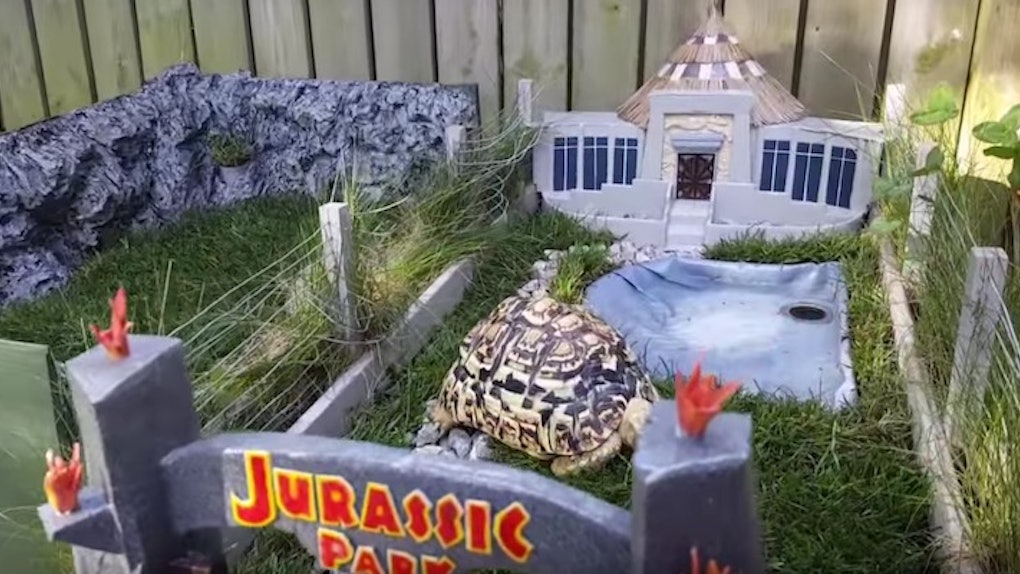 This Little Tortoise Actually Has Its Own Mini 'Jurassic Park' Home

HOLD ON TO YOUR SHELLS!

From a scientific standpoint, Gila monsters, pigeons and turtles are the closest society will ever come to interacting with dinosaurs.

OK, maybe not from a scientific standpoint, but it's definitely true from a standpoint of me inferring facts from movies and the way certain creatures look.

I mean, quickly Google “Gila monster.” Does that thing not look like a dinosaur to you? I'm terrified of that thing ripping the roof off my house, and I'm from New Jersey, which is like 3,000 miles away from any Gila monster.

Turtles and tortoises are pretty harmless though, which makes this "Jurassic Park"-themed tortoise enclosure pretty dope.

Oliver Turpin explained the in-depth specs behind the enclosure in the YouTube video's description.

I made a [miniature] Jurassic Park for my Leopard Tortoise Louie. It has grazing areas with seeds planted to grow as the weather gets better, a pool for him to drink/swim about in, visitors center and the Jurassic Park Gates.

I mean, it's not wholly unrealistic to think one day dinosaurs will come back and take over the planet, but it probably won't be turtle or tortoise dinosaurs. We all probably don't have to worry about turtle dinosaurs destroying humankind... or do we?

Citations: T-Rex who? Louie the tortoise munches on grass in his very own Jurassic Park (Daily Mail)