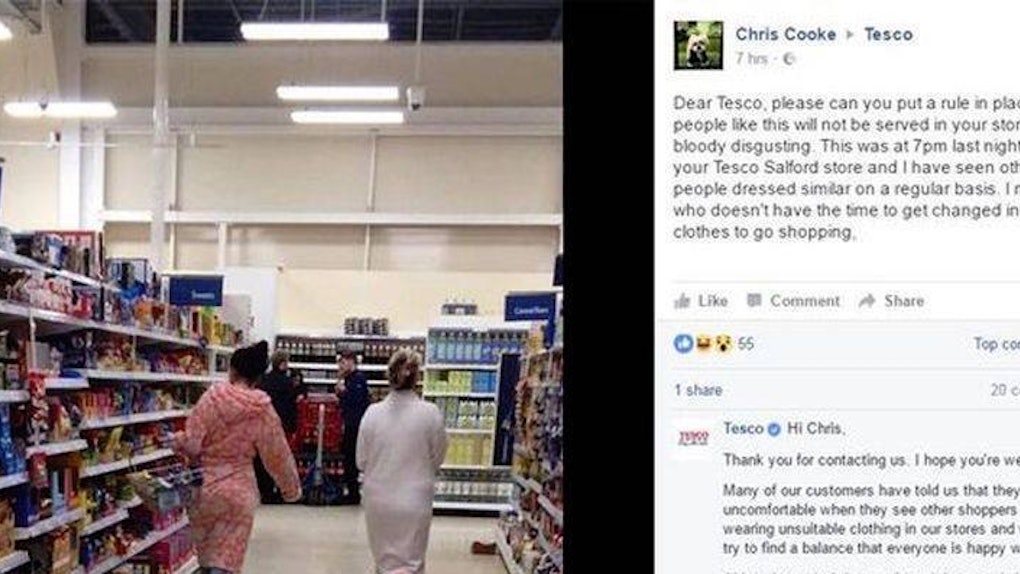 Internet Fights Over Post About Women Shopping In Pajamas

Some man who thought it was his place to police women posted a complaint on the Facebook page of Tesco, a British grocery store.

His complaint? Two women dared to disturb his wellbeing by wearing pajamas to the grocery store.

Please can you put a rule in place that people like this will not be served in your stores. It's bloody disgusting.

Although we don't have a formal dress code in our stores, we rely on our Management Team to use discretion and common sense.

Which is very generous because I would have responded with something like,

Joel Brackenbury, another man who feels entitled to give his opinion when nobody asked for it, copied Cooke's original post, writing,

[C]an you please put a rule in place that people like Mr. Cooke will not be served in your stores. I for one find it uncomfortable to have to shop alongside people who spend their time taking photographs of strangers minding their own business rather than just ignoring things that do not affect them in any way, and have seen other people before making complaints on a similar basis.

Good for you, Joel Brackenbury: You get a quarter of a point for hitting the lowest possible level of being a basically decent, non-creeper man.

I can practically feel your patriarchal guilt melting away as you bask in the liberal likes.

Other people commented with their own opinions on strangers.

Many commented on the creep factor of taking a photo of strangers, while others commented on men's outfits they find offensive, which really does not help the whole "don't police other people" mentality.

Twitter users got in on the debate, because there's nothing users love more than jumping in where they have no place to be. In fact, #pyjamas trended in the UK (where they spell "pajamas" "pyjamas").

In the end, no one won, because this is the internet — where minds are never changed but opinions are blindly screamed into the void forever.