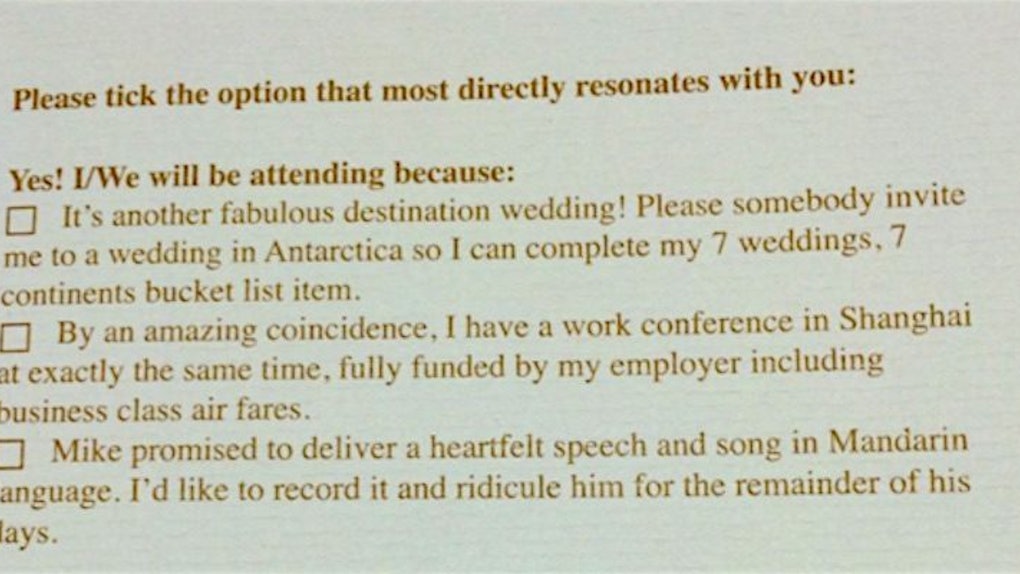 Listen, couple friends, I'm very happy for you and your engagement. However, I do not care enough about it to spend thousands of dollars just to attend another damn wedding on the other side of the planet.

That's why it's really cool this one couple is self-aware enough to realize that. I mean, I still wouldn't go to a wedding in China even if I was a friend of the couple, but yeah.

According to a report from Metro, Michael and Wendy are an international couple who decided to get married in China, where Wendy and her family are from. But, Michael is from Australia, so he sent out some pretty hilarious RSVP cards to his Aussie friends, many of whom probably won't be attending the wedding.

Michael, being the good guy he is, totally understands.

A woman named Beck, whose husband is a friend of the groom, shared the RSVP card she got in the mail on Twitter, and it's pretty brilliant.

Husband's best mate is getting married in China. Best RSVP card I have ever seen! pic.twitter.com/078pjjo4C9 — Beck (@aBecksLife) March 2, 2016

My personal favorite excuse for not attending reads,

No, I/we will not be attending because it's another friggin' destination wedding! Back in my day, it was reasonable to decline a wedding in Yarra Glen on the grounds of distance and the cost of bus fare.

Damn straight, Michael. Based on these genius invites, I'm sure your wedding is bound to be entertaining, but I'm still not dropping mad cash just to see other people's happiness.

But, I do applaud you, sir. Well done. Well done, indeed.