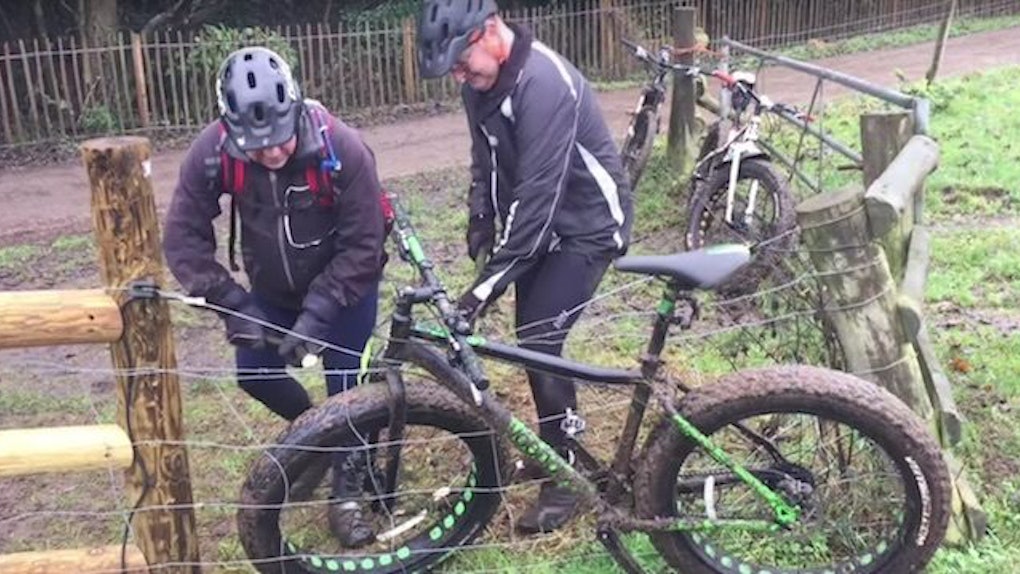 A few unlucky British men were riding their bicycles on Saturday before they came across a very, um, "shocking" discovery.

Apparently, one of their bikes got caught in an electric fence mid-ride,  and they were shocked multiple times while trying to free it from the wires.

One of the riders decided to document the entire scenario by filming the three men attempting to finagle the bike out of the fence without harming themselves, and it's funny AF.

As much as I feel bad laughing hysterically at the poor guys trying to free the bike without getting buzzed, I really can't help it.

But I'm laughing because they're laughing! I swear!

Every other word pouring out of their mouths is "fuck," and the conversations they have while trying to remove it from the wires is good enough for a sitcom on Comedy Central.

The video begins with the team debating how they're going to release the bike from the fence's metal grip without electrocuting themselves, and the steps they take are nearly genius.

First, they resort to trying to grab the bike by its tire... but that fails almost instantly when one of the men touches the metal attached to the wheel by accident.

Thankfully, he's a good sport about it. Hilariously, he jumps up and roars with laughter as the entire group starts cracking up along with him.

They haven't given up yet, though.

Moments later, the group decides to use a stick in an effort to indirectly move the bike out of the fence. After multiple tries and a few painful buzzes here and there, they make some progress.

One of the men can be heard discussing the bike, saying,

It's a fucking bastard, isn't it?

Toward the end of the video, their battle against the fence was coming down to the wire (literally).

One of the men insisted the welder of the group use his hands to toss the bike over the fence.

Before the hero of the day saved the bicycle, he said, "I ain't got any fucking welding gloves on," and then tossed the bike over the fence like the goddamn Hulk.

After the apparent welder tossed the bike over the fence, the men begin roaring in laughter once more and take a few moments to recover from their encounter with the electric fence that swallowed their bike.