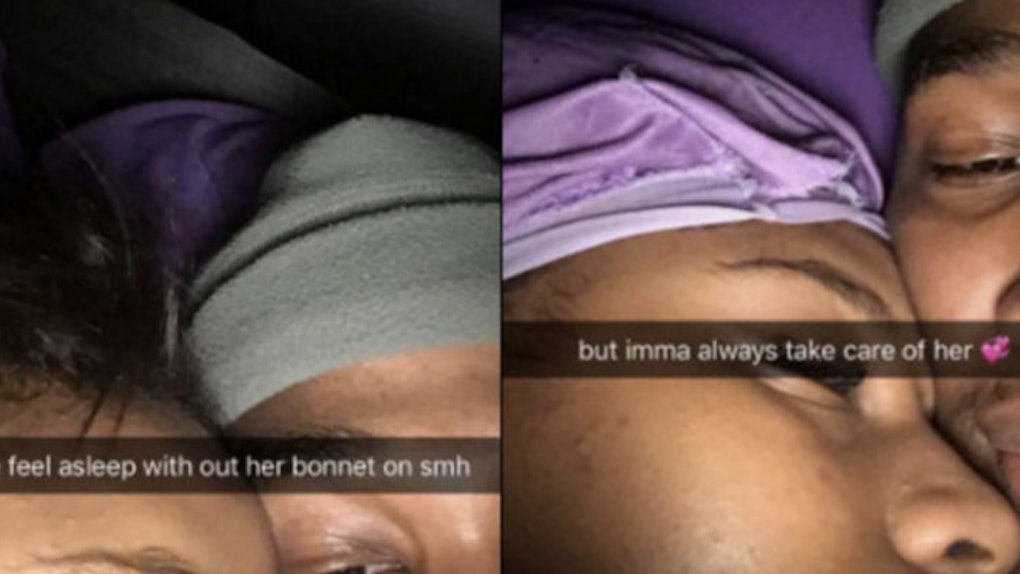 Every night Tiana Harley, 18, goes to sleep wearing her hair bonnet so when she wakes up her hair doesn't get messed up.

So when her boyfriend, 21-year-old AJ Woodson and member of the Air Force Reserves in Greensboro, North Carolina, came home and noticed his girlfriend fell asleep without it he quickly became the CUTEST BF OF ALL TIME.

When I found out he put my bonnet back on I was happy because it shows that he actually pays attention and knows I wear it to keep my hair from getting messed up. He knows I would be upset if I woke up and my hair was messy.

Woodson is constantly showing his girlfriend he cares with little gestures. She said,

Sometimes he picks me up out of the bed in the morning when he sees that I'm sleeping in too late and takes me to the bathroom to get my day started and he takes me to get my nails and my toes done… He's just really sweet.

Ugh, get me a significant other who carries my sleepy butt to the bathroom...

Obviously these two are my new relationship goals. Anyone who protects me from a bad hair day is someone worthy of my hand in marriage.

Harley, who obviously realizes she has a great guy, said she doesn't really consider it to be #goals.

This Twitter user is set on this duo's #goals status.

If your boyfriend or girlfriend doesn't do sweet things for you, like putting your bonnet on while you're sleeping, they aren't worth your time. Especially if you're the one who is always doing for them.

Unless you're dating me, in which case you have to treat me like a queen and I will do very little in return. Not because I don't care, but because I am incredibly lazy and self-centered.

Why doesn't anyone want to date me??

Citations: This Guy Putting His Sleeping Girlfriend's Bonnet On Is What True Love Looks Like (Buzzfeed)