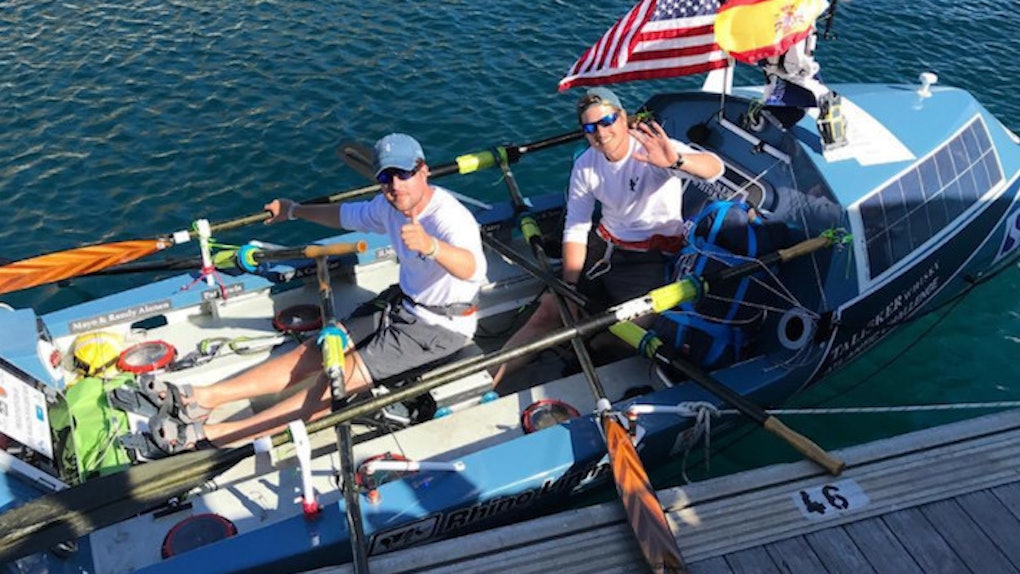 These Brothers Plan to Row Naked Across The Atlantic Ocean

In dreamboat news of the day, two brothers are taking on the challenge of rowing across the freaking Atlantic Ocean — and they're planning to do it naked.

Brothers John Schwartz, 33, and Kurt Schwartz, 29, are competing in the Talisker Whiskey Atlantic Challenge, which is a rowing race designed to test the limits of human physical (and psychological) endurance. The race began yesterday, December 14.

The course spans more than 3,000 nautical miles and will take the brothers about 50 days to make it back to land after departing from the Canary Islands and aiming for the island of Antigua.

The brothers suspect they will complete more than one million oar stokes each, which you can imagine causes loads of physical discomfort, like friction, blisters, soars and (I assume) a lot of other uncomfortable things caused by water, the cold, sea salt and sun.

So because of all of those things, John and Kurt will be completing the race naked.

John told Mashable on Tuesday evening, "It's not atypical. Certainly other folks have done it in the past. It's kind of a running joke in the rowing community that, if you're going to do this, you'd better be prepared to row naked."

Overall, more people have climbed Mount Everest than rowed across the Atlantic Ocean, but the brothers still intend to win the race.

To complete the race in one (physical and mental) piece, their plan is to take two-hour shifts. Kurt explained, "You always want to have the boat moving in the direction you want to go."

Each day, the brothers will be burning more calories than they are consuming, and to prepare, both John and Kurt gained 20 extra pounds each to help combat weight loss and fatigue.

In terms of eating and drinking, their food will be a combination of wet, dry and freeze-dried munchies, and they will be using a solar-powered desalination machine to make ocean water safe to drink.

Kurt described their boat as "more like a rocket ship with the middle cut out than a class row boat." It's roughly 24 feet long, with cabins on either end for storage and sleeping.

The biggest challenge, however, will be finding the psychological strength to stay focused and clear-minded while being on the water and off land for so long.

John said, "You're not going that fast and you're looking at nothing but blue ocean for 45 days or so."

Rowing with the intention of winning, the brothers are also raising money for thesamfund.org, which provides financial aid to young adults with cancer. As of now, they have raised about a third of their ultimate $25,000 goal.

Citations: These two brothers are rowing across the Atlantic Ocean ... naked (Mashable)