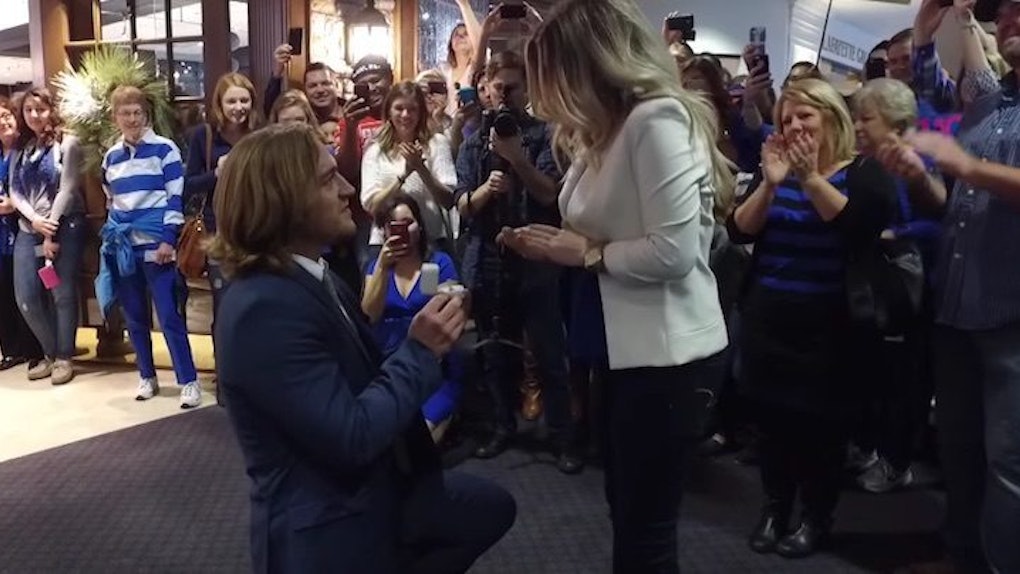 THIS is how you propose!

Who needs skywriters or giant flash mobs to give some lucky lady a ring?

All you need to pull off a good engagement is a brass band, a large building and a bunch of giant flash cards.

Everyone gather 'round; it's story time. Today, you're going to hear the tale of my good friend, Mark (this name is obviously changed, and everything else is real) who decided it was time to propose to his girlfriend, Elana (name NOT changed because Elana is the Muhammad of white girl names).

You see, Mark wanted to make a grand spectacle out of his proposal, so he (and I can't emphasize how real this is) hired a PROFESSIONAL DANCE MOB CHOREOGRAPHER to plan a personalized flash mob in New York City's Central Park that ended with him coming out of a cluster of people, getting down on one knee and popping the question.

Between the choreographer, renting a sound system, props for the bit and other incidentals, the proposal ended up costing Mark around $1,750.

William GJ Gerard's proposal to his girlfriend, Jena, at the University of Kentucky was 10 times better than Mark's, and it probably cost like $50 and free dinner for the band.

Citations: Is this the grandest marriage proposal ever? Romantic pops the question to girlfriend after recreating scene from Love Actually... and of course she says 'yes' (Daily Mail)