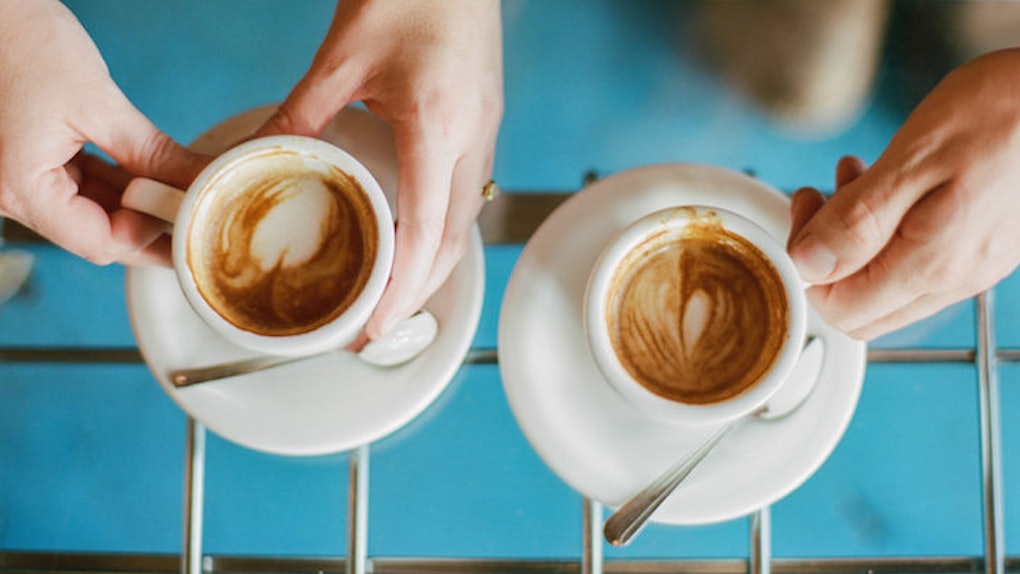 There's nothing I'd love more than to fall in love at a coffee shop.

Call me predictable or super cliche, but I've always had this fantasy about falling head over heels for someone over a latte in a quaint cafe in the middle of New York City.

Unfortunately, I haven't found my prince charming over a cappuccino yet -- but a lucky Twitter user had the opportunity to witness two coffee shop workers fall in love before his very eyes. (That's just as adorable, right?)

In a series of live-tweets, a guy named Jerry documented every moment of a conversation between two cafe workers while they confessed their romantic feelings for one another, which ended with their first kiss.

Before I completely restore your faith in love, take a listen to this song called "Falling in Love at a Coffee Shop," by Landon Pigg. It'll set the mood for the cuteness overload you're about to experience:

OK, now that you're emotionally prepared for the co-workers' endearing confessions, we can start reading the tweets that made me believe in romance again.

Jerry began his live-tweets by assuring everyone he was the only one in the cafe. He then explained he had overheard a female employee telling her co-worker she has a crush on him.

Grab a tissue and read the tweets in their entirety, because they'll definitely tug at your heart strings.

Can you believe this was real?! When are romantic feelings between two people ever a mutual thing? They're called "crushes" for a reason!

I don't know which alternate universe this coffee house was in, but I'd really love to find out.

The fact that the two workers had their first kiss behind the counter, left the coffee shop together and returned hand-in-hand gives me all the faith in the world that maybe -- JUST MAYBE -- love exists.

In case you were wondering how Jerry looked while he was experiencing this romantic phenomenon firsthand, it might've been a little like this:

We feel the same way, Jer.

Hopefully, we'll be able to find a love like "cafe girl," one day, too.