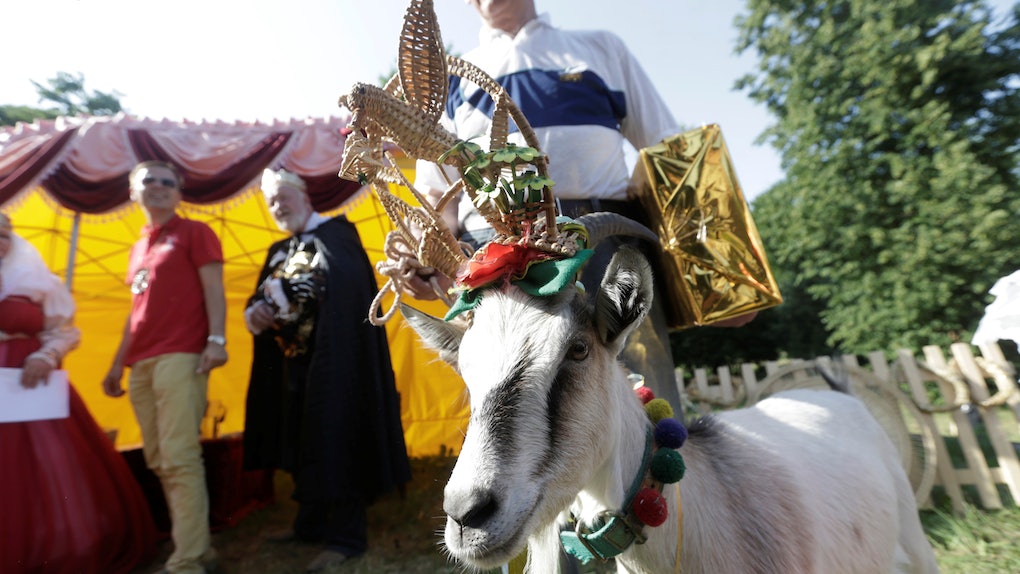 This Goat Beauty Pageant Was Better Than Any Miss Universe Competition

No matter what happened to you this weekend — you went to the beach, got engaged, had a baby, whatever — there is no way in hell your weekend was better than this goat's.

Demyte (AKA “Little Spot”), a female goat, was crowned the prettiest goat in all the land this Sunday. I don't think I've ever been this jealous of a goat, but here I am.

Here she is with her owner after being crowned:

The annual goat beauty pageant (yep, you read that right) was held in Ramygala, Lithuania this weekend. The pageant allowed for both male and female goats to enter because goat equality is important, too.

Demyte was one of six finalists, and she was judged on qualifiers such as having nice skin.

How do goats even get good skin? What IS good goat skin? Like, is it because they drink a lot of water? Exfoliate? Cleanse? What makes their skin bad? BRB, asking my local neighborhood goat for beauty secrets.

Ferdinandas Petkevicius, Demyte's owner, claimed the only thing he regrets about Demyte's final look is that he forgot to paint her nails.

We thought of it too late.

According to Reuters, several of the finalists were flat-out over this pageant, and they decided they'd rather be carried than walk. (This is also proof I was a goat in a past life.)

Everyone should watch this video on a goat beauty pageant in Lithuania. The marching band! The costumed humans! https://t.co/wb7K3XNPCB — Liam Stack (@liamstack) June 27, 2016

Ugh I can't believe this goat is hotter than me https://t.co/hZEaW0lDjm — Gabriella Paiella (@GMPaiella) June 27, 2016

man who was on the reuters beat for the goat beauty pageant because i want that job — Hilary (@exit_everything) June 27, 2016

BRB, moving to Lithuania to fulfill my lifelong dream of winning a goat pageant.