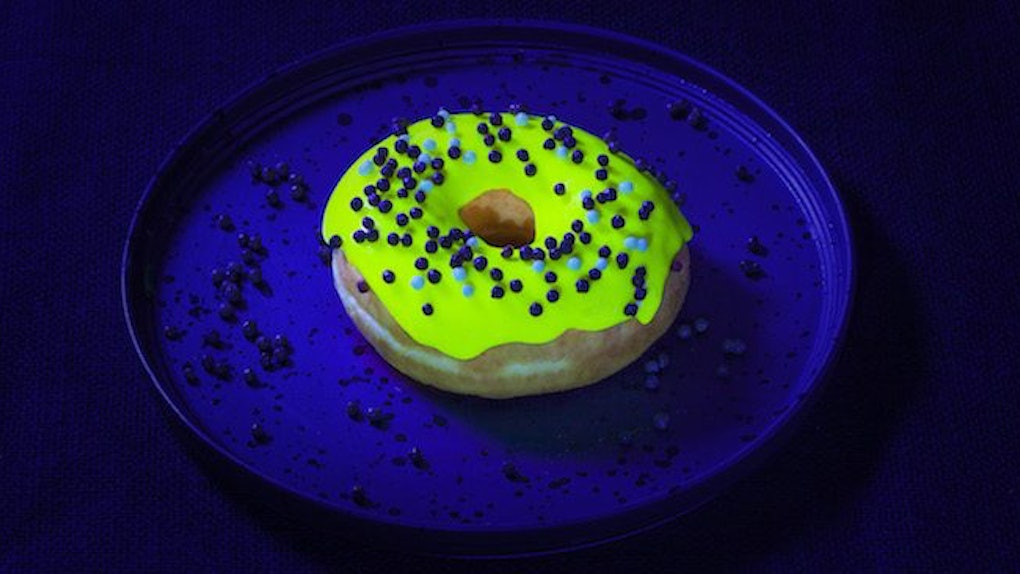 Here's Where To Get Glow-In-The-Dark Doughnuts

I don't know about you, but I always wake up in the middle of the night craving a midnight snack.

Usually, I'll stumble into my dark kitchen, aimlessly reach for my refrigerator door and sift through my groceries until I find the perfect treat worthy of my sugary cravings.

Most of the time, I'll settle for ice cream... but I just discovered a new snack that's perfect for night owls searching for a sweet.

Yes, the Glonut is exactly what it looks like: a glow-in-the-dark doughnut.

Could you imagine waking up in the middle of the night and finding one of these delicious, glowing goodies in your kitchen? I'd probably think I was still dreaming.

The fluorescent Glonut was created by Christopher Thé of Black Star Bakery in Sydney, Australia. He talked to Daily Mail about his icing recipe that makes his doughnuts glow, and said he uses Vitamin B in a yuzu glaze. (Yuzu is a citrus fruit.)

He told Daily Mail, "The ingredient that makes the icing glow is made from vitamin B, which in itself is quite acidic. We decided to then ice the doughnut in a yuzu glaze, which is also quite tart."

Alas, the Glonut was born.

And, no, these doughnuts do not taste radioactive.

If you're afraid to consume such a bright treat, have no fear. Christopher made it clear that his ingredients are "real."

We would never create anything that was unnatural, even if it was a great idea. BlackStar is all about great techniques and real cooking, we never add dyes or additives to any of our products. We strictly adhered to this principle in order to make the glow-in-the-dark donut happen.

As expected, Glonuts are taking over Instagram and people who have already tried the glowing snack are sharing the shine.

They really do glow!

I need to give these a try.

They look gooey and delicious.

If you're intrigued by Glonuts, you can try one out at Sydney's Vivid festival, which is taking place at the Glow Cave Dessert Bar until June 17.

For those of you who aren't in Australia... you'll have to admire the glow from afar through shining, sweet Instagram pictures.