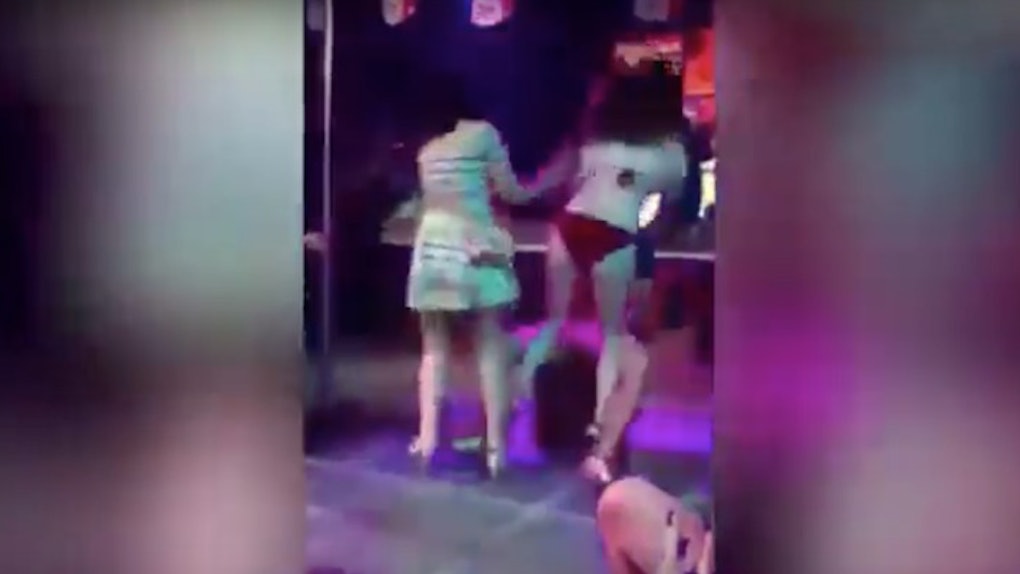 How would you react if your significant other willingly stood up and made their way over to a nearby chair to experience perhaps the last lap dance of their entire life (because you're going to kill them)?

One woman decided that the best possible way to show her disapproval of a stripper giving her boyfriend a lap dance was to literally shove the poor woman and drag her boyfriend away from the scene.

In an epic video recently uploaded to YouTube by Top News, we're taken inside a jammin' strip joint in the Philippines.

Man gets dragged off stage by angry girlfriend mid lapdance. Get your hands off her! Furious girlfriend shoves stripper over and drags her boyfriend off the stage during steamy lap dance. The fuming girlfriend floors the stripper with a rapid knockdown, Security are slow to react as she promptly drags her man off the stage.

Everyone's vibing out and having a great time until some brave guy, who happened to be there with his girlfriend, stood up for a lap dance just as A$AP Ferg's hit single "Work" blared out over the sound system.

That's when, within just 40 seconds, his girlfriend SNAPPED and pushed the stripper out of the way as if to say "b*tch, get off my man."

Honestly, I think she should have been a bit more calm about the whole thing...

She should have said, "Hey, I know I'm at a strip club with my boyfriend, which is exactly where I went wrong in the first place, but can you please stop?"

I mean, am I wrong?! Why was she there WITH HER BOYFRIEND in the first place? That's just asking for, well, a lap dance.

Also, the video is titled "man gets dragged off stage by angry girlfriend mid lapdance."

That's not inaccurate, but it should probably be titled "woman knowingly brings boyfriend to strip club, then freaks out when he gets what he came for."

Despite the obvious better ways to have handled this situation, there has been no word on whether or not any of the people involved are still alive. Just kidding, they are... surprisingly.

Check out the hilarious incident above.