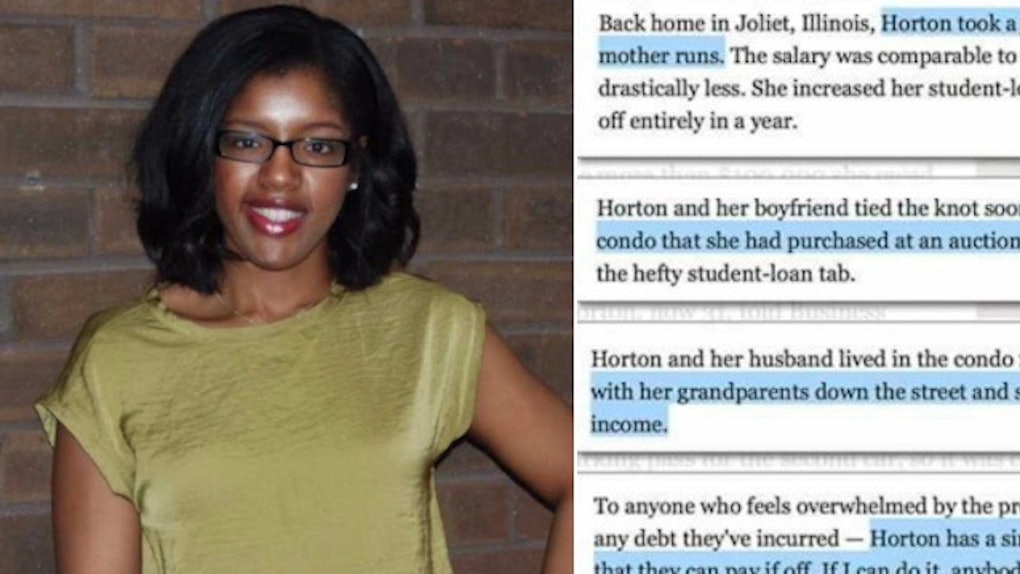 Unless you paid your way through college or went to school on a scholarship, you're probably facing some pretty hefty student loans right now.

Unfortunately, there isn't much you can do when Sallie Mae is hunched over your shoulder like a money-sucking gargoyle.

In the real world, most millennials are living month to month, working full-time jobs for a minimum salary and paying rent on top of their loans.

If only there was a quick and easy way to pay off student loan debt without all the hard work.

Well, a woman named Ebony Horton talked to Business Insider about how she miraculously paid her total debt of $220,000 in a matter of three years, and it's something else.

I'd love to say it's super inspirational, relatable and doable... but it's not.

Her story is actually the most unrelatable student loan tale I've ever read, and I'm having a hard time accepting the fact she seriously thought other people could easily do the same thing.

I'll tell you her story in a nutshell.

To save money, she moved from DC to her home in Joliet, Illinois, and worked for a company her mother runs. She married her boyfriend, and her mom gave her a $13,000 condo as a wedding gift.

To save money, the couple ditched the apartment and moved into their grandparents' house so they could rent the condo instead. Then, they bought two more condos so they could rake in the rent cash.

Eventually, she moved back into her parents' house and stayed there until she and her husband collectively paid the rest of her loans off.

After her story went viral, Twitter got pissed at Horton's "privilege."

People argued not everyone is lucky enough to have the support she did.

"It took me 12 years to pay off my debt. Because I live in reality."

Me next! Me next!

"If I can be gifted a condo, anyone can!"

"If you are suddenly poor, YA BLEW IT."

Nice try, Ebony. As "inspirational" as your story was meant to be, Twitter isn't buying it.